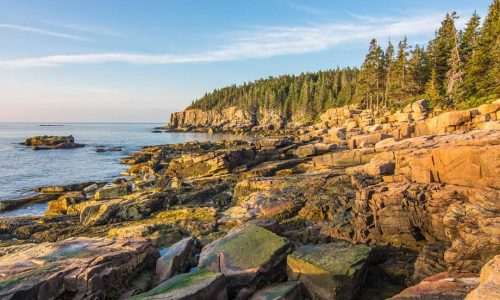 Our first two nights were spent just to the north of Acadia National Park in a (mostly) RV campground; Timberland Acres RV Park in Ellsworth. How nice to start our camping off with a very clean and well managed campground. Everyone here was quite friendly and helpful.

The drive up to Acadia was uneventful; we stopped at a little hole-in-the-wall restaurant and enjoyed a nice breakfast. Later, we stopped along the road at a pretty fish and wildlife area and picnicked on PBJs and cold sodas from the cooler, which was doing a great job of keeping it’s contents nice and chilly. We arrived at the RV Park in the early afternoon, set up camp, then drove on down into Acadia to scope out photography locations, stopping once to hike a couple of miles on Ship Harbor Trail at the lower end of the park.

Somehow we got ourselves turned around and ended up driving along the one-way loop, stopping now and again for a nice view. We drove, at a snail’s pace, through Bar Harbor but with no place to park we continued on. By late evening hunger finally compelled us out of the park and into a lobster pound so we could indulge in the local delicacies. There’s just something about fresh Maine lobster. We dined at Down East Lobster Pound on 1.5 pound crustaceans, corn-on-the-cob cooked inside it’s own husk, a side of slaw, and of course, melted butter. Holy Cow but it was good!

Afterward we retired to camp and made an early night of it. This early night thing was to become a welcome habit.

The next morning we were up at 4:15am to get down to the park and shoot sunrise from the top of Cadillac Mountain. Unfortunately for us and many other hopefuls, park rangers had the road blocked off and we’re waving everyone on down the road – the parking lot at the top was already full. Given no other choice, we decided to head to Bar Harbor for some breakfast then once again we took the one-way loop. This time we stopped for some nice photo ops. By late morning we were able to drive up to Cadillac Mountain Summit and we hiked the loop there. The views were stunning and well worth the wait. After driving back down the mountain we left Acadia and headed to Petit Manan National Wildlife Refuge where we hiked two miles on the Hollingsworth Trail and saw a Downy Woodpecker. Back at our tent that evening I cooked our first meal at camp. Rice with chicken. We would have added beans but the neither of us could figure out how to operate the old fashioned micro-mini-can opener we’d brought along.

The next day we were up early and headed to Canada.