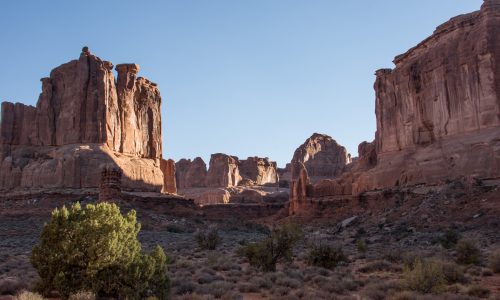 We arrived in Utah around 9:30 in the morning and almost immediately the landscape began to change. Once we turned right onto 191, the change was even more pronounced. My excitement for Arches National Park grew.

The first stop was Wilson’s Arch, about 150 ft tall. This arch is not within the park boundaries. The timing could not have been better as I was able to climb up to it and get the sun behind it. Sweet. I took several shots to that composure, in hopes for a decent HDR composition. After stopping at the Visitor Center and watching a short movie we headed into the park. We made several stops along the way with my eye on the Three Gossips formation. Then we turned down toward The Windows Section of the park. There we had some quick PBJs and then hiked up to Double Arch where I got to practice lots of patience while photographing it. From Double Arches we hiked over to North and South Window and looked back to see Turret Arch. Since we were all alone at South Window, quite unlike us, we took a selfie. Then we got adventurous and took the primitive trail (the long way) around the North and South Windows. It wasn’t a tough hike until just near the end where some scrabbling had to be done. From The Windows we drove north to view Delicate Arch and hiked the Upper Arch View,  half-mile 200 ft. elevation hike to get a closer look at this pretty formation. It was 5:00 when we started heading out of the park to check in at the KOA and set up camp. Afterward we rewarded our hard hikes with a good dinner.

I had an idea for the Harvest Moon, scheduled the next night, so I asked Alan to drive me to Wilson’s Arch, 20 miles south of town. I did some calculations and started making my plans.

We hiked a bit more than 7 miles today.

We got up at our leisure, had bagels and fruit, then drove all the way to the end of the park to Devil’s Garden and hiked the first few trails there. We saw Tunnel, Pinetree, Landscape, and Partition arches. There is a second, longer and tougher loop, but we knew we wanted to do hiking in other areas, and well, it looked particularly difficult. On our way south, we stopped at an overview to see the Skyline Arch, a short walk was needed to reach the overview – it was very nice. Next we drove to Sand Dune Arch trail head and hiked to that arch, which was set back between monolithic fins. At one point Alan was behind a woman who wasn’t sure she could make it up and over a particularly high hump between the fins, when she saw there were several of us behind her waiting to get through, she asked Alan for a boost. Afterward he joked with her that if he’d goosed her she would have gotten through much quicker. On the way back I helped her getting down over that same hump. We’d decided we wanted to do the whole 4-mile loop, so from Sand Dune arch we struck out for the half-mile trek across the desert field to Broken Arch. This required some scrabbling through that monster, fortunately a young man jumped and hopped ahead of me then extended his hand to help me get a leg up to the top of the arch base. Kindness extends kindness. Alan managed to get up without any help. Scrabbling down the other side of the arch was easy and we hiked onward toward Tapestry Arch and the rest of the loop. Along the way we met up with two women who informed us that the campground half of the loop was closed but that we could still get to Tapestry. What?!? You mean we have to go back over Broken Arch? Well, dang, that was not fun news. We looked at each other and shrugged, thanked the ladies for telling us and onward we went. Along the hikes I channeled my inner Mountain Goat when I was climbing up and down the solid rocks, looking back at Alan and making little bleating sounds – it made him laugh. On this last arch I hiked alone the last 10th of a mile to get under it while Alan rested on the rocks. When I returned, we turned around and doubled back, warning everyone we met along the way that the loop to the campground was closed. Once we got back to the truck we drove down to the Fiery Furnace viewpoint and walked out to the overlook there. What a landscape that was! This particular part of the park requires a hiking permit. Having taken photos of some tracks and some scat out at Devil’s Playground, I stopped in at Visitor Center on the way out of the park to ask about them. Turned out it was Mule deer tracks and coyote scat.

We stopped by the grocery store to lay in some supplies for dinner, then spent the afternoon resting back at camp.

At 6:15, after a panicked search for Alan’s phone (found it), we drove out to Wilson’s Arch for my planned photo set up. I set up the tripod on a sandy hill in front of  the arch after triangulating the moon’s rise, and took a few base photos. Then I had some dinner with Alan while waiting for the Harvest Moon to rise inside the eye of the arch. It rose exactly where I’d expected and I took photos of the moon. I’m working on the composite.