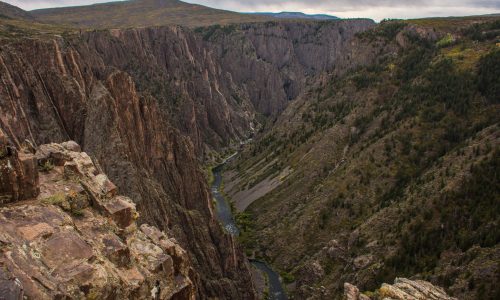 We ate breakfast at IHOP on our way out of town. A nice treat.

We arrived Crawford State Park around 1:30 and got a camping permit for Iron Creek campground. After selecting a site (there were several dozen to choose from) we realized we’d chosen badly in that the site was being pummeled by winds coming across the plains. We walked the whole campground and finally settled on a different site and set up camp there. For the first time we used the guys and stakes to tether down the rain fly against the high winds. We’d learned our lesson on the prairies in Canada.

Once camp was secured we took off for the south Visitor Center at Black Canyon of the Gunnison National Park. We made it there with 30 minutes to spare, picked up a map, got the Passport Book stamped and purchased a sticker and lapel pin.

The drive along the canyon rim affords you the ability to see inside the canyon from time to time, but the best views must be walked out. The shortest walk was 100 yards, while the longest was 375 yards (about a quarter of a mile). The views at each point were stunning. Black Canyon is deep, 2,722 feet at its deepest, with steep cliffs, crags, spires and a river at the base. At a few of the points I walked away from the viewing spot and walked out onto a rock ledge at the edge of the canyon. My fear of heights is quickly being tamed. At Cedar Point we watch Ravens playing in the wind, copying each other’s aerial acrobatics and making the same caws as they did so. It was so much fun to watch them, but we were losing light so we drove on.

Dragon Point was the last we hiked so we could watch the sunset. Alan was able to call his mom from there so I walked away to take pictures of a Mesquite tree. He caught up with me as they ended their conversation. On our way out of the park we could see the sun setting to the west of the magnificent San Juan Mountain range. They were snow-capped and the sunset provided a lovely pink glow behind them. Just as we exited the park we ran into a traffic snarl – a large bovine and her calf walked out onto the road in front of us. We waited until she made up her mind to move back off the road before we moved along. It gave us a chuckle.

Having passed through the town closest to our campground, Alan hit the brakes hard – six cattle with long horns were on both sides of the road. He crept by, careful not to startle them onto the road.

We abandoned our previously made plans for dinner and tried Taco John’s instead. While the Churro was great, we agreed we like Del Taco better.

Getting back to the campsite after dark was strange and proved to be a little frustrating as we got ourselves settled in for the night. But it all worked out and we sat with our books and read ourselves to sleep.