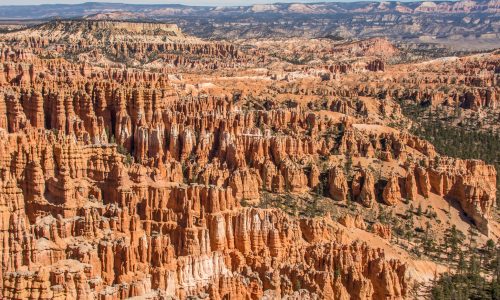 We took showers, had a good breakfast, decamped and headed to Bryce Canyon National Park.

We arrived a bit before noontime and stopped at the Visitor Center. It was very, very busy and we feared a repeat of Zion. Fortunately though, we always found a place to park and got lots of good photos. On Monday we plan to do some hiking.

We got up and out early this morning to avoid the crowds at Bryce. A bagel with peanut butter for me, and PopTarts for the PopTart Kid (himself loves PopTarts).

When we got to the park there were very few visitors – it felt like we had the whole place to ourselves – a nice change from previous weeks. We drove all the way to the end of the road (18 miles), then started making our way back, hitting all the stops we had to miss the day before because the parking areas were full. We decided to hike Queen’s Canyon, a steep one-mile hike down into the canyon. The hike down led us to believe the hike back up was going to be murder. It really was steep – at least to us and many others on the same trail. It was not an easy hike but we both agreed that it was one of our favorites on this trip. With the exception of Prince Edward Island, the hard hikes always seem to be our favorites. When we arrived at the bottom, at Queen’s Garden, we sat for a brief rest. This alerted the local chipmunks that some snacks might be in the offing. Unfortunately for them, we know better than feeding the wildlife. This didn’t stop the little buggers from begging from our laps! They are cute. We also saw a White-breasted Nuthatch as it looked for possible leftovers. I’d made up my mind that I would hold off taking pictures until we were on our way back up the canyon, this would provide me with plenty of excuses to stop and rest – and it worked. The hike back up was not as bad as we’d originally feared. As we rested at the top, another group of similarly aged hikers came up and, since we’d spoken to each other on the way down, one of the hikers gave me a big thumbs-up. When she and her crew reached the top, I gave them generous applause. It gave us all a good laugh.

Once rested, we headed out of the park and stopped for lunch at a local restaurant. The buffet food offered was very good. Done with that, we struck out for Fairyland Point, a pretty overlook at the north end of the park.

Alan had seen something online about the area and decided we needed to check out Kodachrome Basin State Park nearby. After all, it was named Kodachrome. So off we went, while I nodded off in the truck as he drove.

The park was pretty cool. It had some hoodoos, cliffs, spires, stacks and an assortment of other geologic formations. Nothing in great quantity, but they were all quite interesting nonetheless.