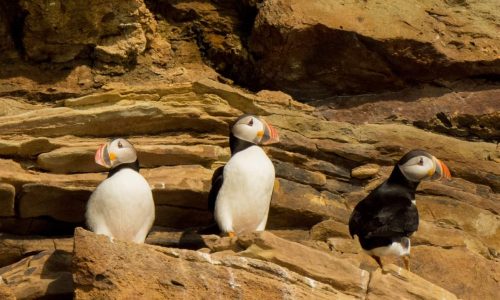 Once in a while laundry has to be done, so this day was spent traveling to the North Hotel in Cape Breton and taking care of the day-to-day necessities.

On this morning we tried Tim Horton’s for breakfast – quite an indulgence – then we drove out to the peninsula to the Cabot Trail.

The Cabot Trail is a road that encircles Cape Breton peninsula and includes Cape Breton Highlands National Park. The landscape here is beautiful.

At a stop at Lakies Head I took photos of the shoreline and some Gannetts, instructing Alan in the art of tracking and shooting moving objects with a long lens, no easy feat.

We stopped for lunch at a tiny little shack that had just opened for Lobster Burgers that were really quite good, then continued the Cabot Trail to stop at Skyline Trail for a quick 2.5 mile hike. Our hopes for spotting a moose were squashed by our need to get going on the road again for our next scheduled adventure. We consoled ourselves with spotting plenty of moose poop along the trail.

Looking for cheap gas we went off the road a bit and stopped at a small Irving station (fast becoming our favorite gas station chain here in Canada). There Alan filled the tank while I perused the aisles for snacks coming across a Canadian favorite, ketchup flavored potato chips. I had to try them, so they were added to my handful of salty-crunchy things. Alan tried a single chip and declared them to be off his list of anything edible. I tried one and found the taste to be similar to vinegar chips from back home, but with a hint of ketchup taste. I managed to eat half the snack bag before giving up – the vinegary taste was just a wee bit too strong for moi’.

Our next adventure for the day was a boat tour to photograph Puffins.

Bird Island Tours is a family-run business that has everything from camp sites and cabins to bird watching tours and the one we took, which was strictly for photographers.

They do this cruise right; going out late in the day so that you have the setting sun for golden hour photography, and they limit the number of photographers on the boat so as to provide elbow room and space for everyone to be able to shoot comfortably.

The trip to the island took about 40 minutes. Once there we saw all manner of sea birds, and a few we would not think of as sea birds. Atlantic Puffins were the bird of the day though and we were not disappointed. Mostly they were in the water, while a few were on the clifts. Shooting from a moving, bobbing boat with a long lens is a huge challenge, but the rewards are worthwhile. Along with Puffins we saw lots of Double-Crested and Greater Cormorants, Black Legged Kittiwakes, Razorbills, Northern Gannets, Herring and Black Backed gulls, Great Blue Herons, and Bald Eagles and several others I’ve already forgotten. We also saw Grey Seals among the rocks. I managed to squeeze off a few decent shots, and Alan got a bunch of great pictures too. A great trip all in all.