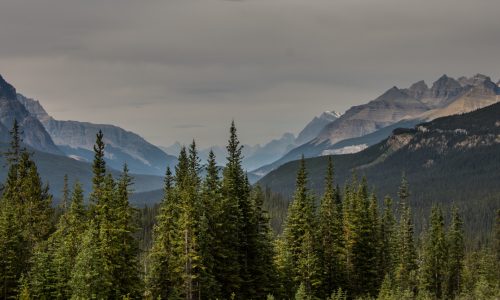 After a very restful night at a very nice Best Western hotel in Havre, Montana we hit the road at around 9:00.

When we arrived in Shelby we got gas and washed all the backroads’ dust, dirt and mud off the truck. I’d forgotten how much fun it was to operate one of those wand washers. For $2.50 we had a clean truck again.

Afternoon saw us at our KOA campground with Glacier National Park‘s mountains as the backdrop. After setting up camp we drove to the park to check in and get a map. From there we drove up to Logan’s Pass Visitor Center. At about 3:30 in the afternoon it was still swamped. We found a parking spot though and went inside. A very knowledgeable staff member gave us some tips of where to hike and “definitely recommended” purchasing bear spray. We did as she suggested and also purchased a long-sleeved t-shirt and a pin as souvenirs. Then we got a lesson from a ranger on how to use the bear spray, as well as information about declaring it as a weapon when crossing the border.

At 5:30 AM Monday morning we were up and by 6:30 we on the road to Logan’s Pass. By the time we got to the trail head parking lot it was already starting to fill up. Our goal was Hidden Lake Overlook along Hidden Lake Trail. Hidden Lake Trail, to the overlook, is 3.5 miles with a 650 foot gain finishing up at 7,200 feet above sea level. For me, it was an ass kicker. We stopped frequently for breathing breaks and only once did I have to use my inhaler. The scenery was spectacularly breathtaking though and made the exertion well worth it. As we started to make our way up and around the side of the mountain we spotted a whole herd of Big Horn Sheep resting along the face of the mountain. They were so calm, just laying down and chilling out. As we started to continue our hike a Grizzly Bear was spotted coming up over the rise in the direction of the sheep. The sheep stood and started moving away from him. He seemed to have an interest in them, but must have decided they weren’t worth it and he went back over the other side of the rise. Further along the hike we saw a small something making a chirping noise and moving very quickly between rocks and boulders. We finally got a good look at it and saw it was a Pika. Very cute.

When we finally reached the overlook we were awestruck. There were no words to describe the scenery before us. Hungry, we sat on some rocks and made a picnic of the cheese sandwiches we’d brought along. A cheeky ground squirrel crept around our feet hoping for some accidental tidbits. The trip back didn’t take as long since it was mostly downhill, but somewhere along the way I lost the tip to one of my hiking poles. Nuts. We also saw the sheep again.

When we reached the Visitor Center it was a madhouse. Today was the day for the total eclipse of the sun. I decided to give a go with what I had, stacking my 10 and 6 MD filters and I actually got a halfway decent photo. Next time I will be ready with the proper filters Once we exited the circus of a parking lot we continued westward on the Road to the Sun. It was some tight driving but Alan is a master. There was quite a bit of road work going on too, which made the going very slow. We decided to go back to camp the long way – the southerly route around the park, stopping in town to find something for dinner.

I surprised Alan with steaks for dinner.

Gluttons for punishment, we were up and out by 6:00 Tuesday morning, this time to go to Many Glaciers and hike Redrock Falls trail.

After about a half mile we took the spur to Fisher Cap Lake. There we saw two Mull Deer bucks, and a huge bull moose feeding in the lake. It pays to get up early. We hung around for almost an hour until he decided he’d had enough to eat and exited the lake quite close to us. At one point he was walking straight towards us before he turned to climb out of the lake. I must have shot close to 500 photos. While we were there a kind gentleman with a spotting scope told us where to look up on the side of the mountain for a Mountain Goat. Sure enough there he was. Pretty cool.

We left the lake and continued along the trail. After awhile I heard a branch snap ahead of us. Already being cautious for bear in the area I stopped and looked around. I saw movement and a dark shape ahead on the trail and for a brief moment thought or sure it was a bear, but then I was able to make out that it was another bull moose. We stopped and waited for him to move off the trail but he was taking his own sweet time. Another couple came along and got curious and approached the moose who apparently wasn’t keen on paparazzi and finally moved off the trail. We carefully scooted by him, his tail end not more than five feet away.

We finally arrived at Red Rock Lake, which was more like a mirror than a lake. It perfectly reflected the mountains behind it. On the way back we encountered some Sharp Tail  Grouse, right at our feet. They seemed totally unperturbed by our presence. Strange creatures. We stopped again at Fisher Cap Lake, and this time we saw a young bull moose in the lake. I snapped a few pictures and we headed back to camp.

That evening I ordered new tent poles (to be shipped to my bother’s home in Tacoma), and two new tripod plates for Alan. We did some laundry and I worked on the moose pictures.

Wednesday morning we slept in until almost 7:00. For a treat I made pancakes for breakfast.

We broke camp and headed north to Waterton Lakes National Park in Canada hoping to snag a campsite in the park. We were in luck and got a no-frills site shielded by trees from the winds off the lake.

Once camp was struck we explored the roads through the park, making some stops in town for a tip for my hiking pole, odd and ends, and some food.

Afterward we drove to Red Rock Canyon for a short hike to Blakiston Waterfalls where I shot some photos. On the way back to camp we saw three black bears; one crossing the road, and the other two in the river near our camp. And a deer tried to commit suicide by vehicle, a.k.a. our truck. Close call.

One of the bears that was in the river was just waking up. The photos show him yawning, scratching and working up to moving on with the business of finding some food. One of the oddest things we saw and experienced was the presence of free-range cattle on the road. These fellows just wandered wherever they pleased in search of food. We even came upon a bit of a traffic jam with a cowboy herding them along.