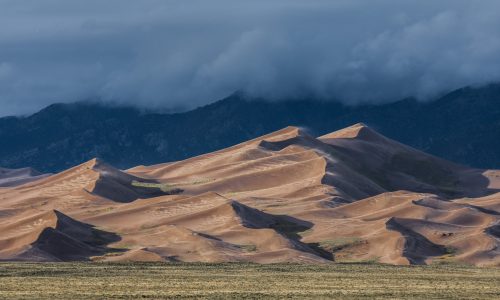 We woke up to nearly clear skies and could actually see the snow-capped mountain peaks from our room. I wished we were staying one more day.

As we drove thru Denver we stopped at a CVS for some Lutein (for my eyes), and to pick up a new 35mm lens. Along the way I saw one of my fav NFL team’s stadium. Nearing Colorado Springs the pretty skies we had enjoyed so breifly disappeared and we got socked in with clouds and mist. Again. ~sigh~ we are both getting tired of the overcast skies and cold rainy weather.

While the weather prevented us from seeing Pikes Peak, we were able to visit the Manitou Cliff Dwellings just south of Denver. It is amazing to me how these First People, the Pueblos, engineered their homes and communities so well that today, given only the tools they had back then, our more advanced society could not replicate these structures. We picked up a few souvenirs at the museum. As we drove on to our destination and turned on to Hwy. 160, the Spanish Peaks came into view. The snow-capped tops made for a stunning contrast against cloud-filled skies. It took our breath away.

Having phoned the Base Camp Family Campground to confirm they had tent sites with electricity (the man I spoke with said yes, they did), we arrived around 5:30 to find a sign on the door of an RV instructing new arrivals to phone the same number I’d called earlier. This time a young lady answered and I told her we were there about a tent site with electric. She told me they didn’t have any tent sites with electric. I told her a man who answered earlier said they did. She insisted they didn’t, and that was probably her dad – she seemed confused as to why he would tell us that. We were stunned, and a little ticked off, so we left and drove toward Alamosa in hope of a hotel room. Roadway Inn provided one.

Because photographing the dunes is best done in the late afternoon and evenings, we took our time getting up and out the door. We were rewarded with absolutely beautiful views of Blanca Peak and the North Zapata ridge as we approached Great Sand Dunes National Park. I couldn’t get enough of it, and took loads of pictures.

As we drove further along the road to the park, the sand dunes came into view. I was surprised by their size – I had no idea they were so big!

We made for the Visitor Center and I put a stamp mark in our National Parks Passport book while Alan found a lapel pin. We looked at maps and read the information and decided to drive out to the Point of No Return.

There was a sign at the start of this sandy road which read, “Soft sand path, 4WD only past Point of No Return”. That meant our truck could not forge on past the PoNR, but it didn’t mean we couldn’t drive out to it, and that’s what we did. it was a very narrow winding path with lots of large puddles of undetermined depth. Alan was a champ at driving it, but later told me it was tough going with his biggest concern being another vehicle coming toward us; who would have to back up? Once we reached the 4-car parking lot at the PoNR, we turned around, allowed a big ol’ duely to pass by, then headed on back. We do love a good adventure.

With forecasts for some pretty intense weather, and seeing the storms coming toward us across the flatlands, we opted to return to Alamosa for lunch and then stay in our hotel room to wait for the storms to pass by.

The evening brought out the sun! Oh how I loved to see that bright orange orb sneaking out from behind the clouds. It provided tremendous shadows on the dunes. I stood out in the chilly strong winds for an hour or so waiting for that just right moment. I think I got a few nice shots.