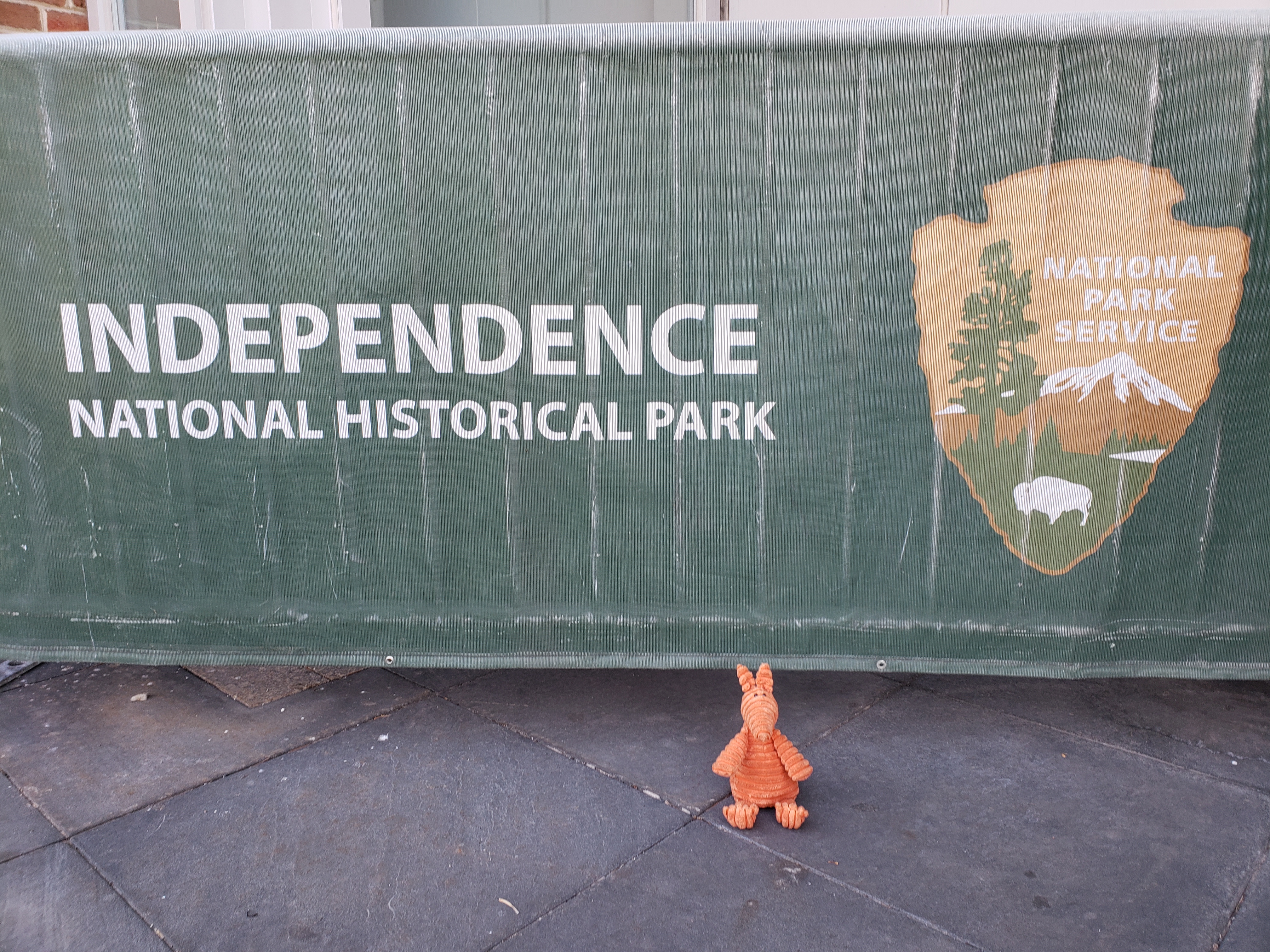 Philadelphia is an historic city, and we planned to hit as many sites as we could today.

We set out early and drove into the city to the Philadelphia Museum of Art and the front steps immortalized in the movie, “Rocky”. I convinced Alan to park out front, and he strode up the steps while I jogged up (no, I did not run up the steps – I’m not in that good of shape!). We took some pictures, then he went back to the car (his mom’s car) and waited for me while I got some pictures with the Rocky statue nearby.

Next we drove to the Edgar Allen Poe National Historic Site, a small home on a small street, and learned a lot more about the author than I’d ever imagined. Poe was not just a prolific writer of poetry, but he is also known as the writer of the first murder mystery novel, an accomplished editor of several magazines of the time, and he was in the army too.

I bought one of the books of Poe’s works before we left the site.

We left the Poe site and parked in a garage underneath the visitor center for Independence Hall and other sites in the area.

The visitor center was full of good information on Independence Hall, the Liberty Bell, Old City Hall, and the Thaddeus Koscuiszko National Memorial. I got into a deep discussion about Thaddeus Koscuiszko with a park ranger. She was very excited about this historic figure, telling me that she had a masters degree in history and she’d never heard of him until she started working here. Based on our chat, I was eager to visit his historic site. While I talked with the ranger Alan picked up some free tickets for a scheduled ranger-lead tour of Independence Hall.

From the visitor center we walked to get in line to see the Liberty Bell. The line was long only because of security screenings, once through that process the gallery was not overly crowded. People waited politely to get their photos of the Bell, and I finally got my turn, but I decided not to include Aardi out of deference to all the other people in line.

Since we still had plenty of time before our tour, we visited Old City Hall and the American Philosophical Society who had a gallery set up for :”Mapping America”, which I found fascinating. The ability at that time in history to map the new country stunned me. Some of it was incredibly detailed, while other maps were a little bit off – but still very good considering their tools and knowledge.

Our tour time for Independence Hall was to be 12:40pm, but when we approached the line area the ranger checking tickets allowed us to join the 12:20 group.

The tour started in a room with a screen and we were lectured by a park ranger who, you could tell, was very enthusiastic about how important Independence Hall was in our nation’s history. She then led us to the courtroom, lectured a bit more, then took us to the room where the Declaration of Independence was signed.

After the tour we walked about a bit more than half a mile to the Thaddeus Kosciuszko (pronounced: Coz-CHOOS-co) National Memorial, which is the smallest park/site out of all 417 parks in the National Park System.

Thaddeus Kosciuszko was a Polish patriot and brilliant military engineer who designed successful fortifications during the American Revolution. He was close friends with two presidents, Washington and Jefferson, and hosted dignitaries like Chief Little Turtle. He was also an ardent supporter of human rights, anti-slavery, and women’s rights as well.

For a late lunch we walked about another half-mile to Ishkabibble’s for a lunch of Philly Cheesesteaks and fries.

We walked back to the Visitor’s Center, studied a display on slavery, then shopped, but didn’t buy, and then found the car and headed back to Alan’s mom’s house. It was a full and satisfying day in Philly.