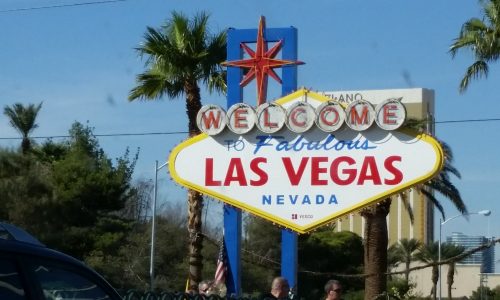 On our way to Vegas we stopped by the Area 51 Alien Center for some fun. We both got a lot of giggles out of the place and I (can’t believe I) bought a Spock eye mask. (big stupid grin). We had fun with that, and also picked up a pin. It goes without saying that we had to visit Las Vegas. Alan had been once when he worked for IBM, and I’d never been – so – Vegas baby!

Neither of us are city lovers, so this was going to be a challenge for us. We’d booked a nice room for three nights at the Luxor (my choice – a Harrison Ford/Bladerunner thing), and Alan was really looking forward to a nice shower and comfortable bed. We both saw this as a chance to take a long(ish) break from all the camping.

After taking some serious showers we went to see Penn & Teller. What a great show! Afterward both men went out front to stand with fans for photos. I stood with Penn but for some reason my phone’s camera failed and we didn’t get a picture. Ah, another glorious shower before going out to walk the Vegas Strip. We walked from the Luxor all the way to the Treasure Island, then about halfway back again before giving our poor feet a break and taking the Trams back to our hotel.

Along the way we visited Madame Tussoud’s Wax Museum. I couldn’t believe how lifelike the figures were. While there we were also treated to a 4D short movie experience of the Avengers. We visited the Paris casino, saw countless other casinos, had a late lunch at White Castle, and got our tickets confirmed for our evening’s entertainment.

We rested at our hotel and had dinner at The Buffet in the basement of the Luxor. I tried tamales (delish!), some sushi and had some nice Greek food.

After dinner we dressed for going out and attended a showing of Cirque du Soleil Mystere. This was the Cirque’s original show and it was fantastical, amazing, wonderful and awesome! The feats of strength and agility of these performers took my breath away, and the comedy parts were loads of fun too.

On the way back to our hotel I snapped some phone photos of the Strip at night. We took our time getting up, then went to breakfast, took showers (again? oh, yes!) and then I went for a manicure. My hands looked like they’d been through a war and Alan encouraged me to get a little pampering. It felt kinda nice.

Afterward we drove to north Vegas to see a veteran’s memorial that my cousin, Alan Schrimphf was instrumental in getting built. It was a very nice memorial. Next we headed out to see Hoover Dam. We were both impressed with the engineering and architecture, but not the prices they wanted to charge just to enter the Visitor Center. They weren’t running any tours this day, so we just walked across the dam – from Nevada to Arizona, then back again. Next we saw a movie – Jackie Chan’s The Foreigner, and then went back to Vegas and parked (for free) at the Bellagio so we could watch the five-minute water fountain show, which was very impressive.

Next we went to our hotel where we had a bite to eat and then gambled using just a $20 bill. At first we made $5.75 – then we started losing and wound up with just one cent. One-armed bandits got us. LOL It was a strange and fun experience that won’t be repeated.