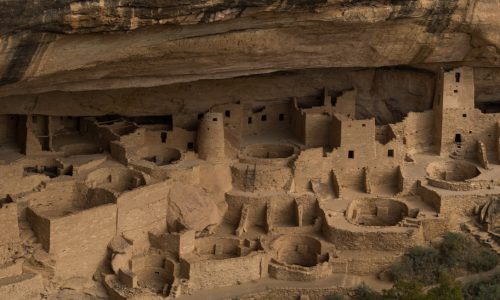 Driving to Mesa Verde we made a lot of photo stops. Most were mountain shots and some were Aspens. At one spot near the top of the San Juan Mountains, it was snowing, and as we drove on the snow continued to fall. We were at the lower portion of the snow line. As we approached the park we saw the KOA where we hoped to camp and stopped in and arranged for two nights, then drove on to Mesa Verde.

Once we had obtained the usual map, sticker and lapel pin we headed out along the road into the park. Mesa Verde is known for its well-preserved Ancestral Puebloan cliff dwellings, and there are many more than I’d thought. I had only known about three or four, but there are better than a dozen of the dwellings that can be viewed from various parts of the park. This day we saw the Cliff Palace, which is closed for the season to the public, and several other sites. This park is exciting if you are interested in Native American history. This morning’s weather started out brisk, nice and chilly at 38 degrees. As usual, I was up before Alan, but I stayed in my sleeping bag snug and cozy until hunger got the best of me at 7:20. I poured myself some granola with almond milk and sighed, contended. Alan was up 15 minutes later.

We took our time, ran errands (some new tent poles were needed), and then headed on to Mesa Verde for some more adventures. This time we took the Wetherill drive to Step House and hiked along the canyon wall to the Puebloen cliff dwelling. I was so excited!  The architecture here was, to me, amazing for such a primitive people. At one point, with Alan’s encouragement, I climbed the ladder up to a second level. It was awe-inspiring being able to touch history like this. The hike back up wasn’t bad, and we headed around back to the Chapin Mesa drive where we visited the museum, and I picked up a pretty pair of hand-crafted earrings.
We drove back northward up the Chapin Mesa and stopped at the Far View Sites; a set of villages that we hiked to, one from the other to the next. Fascinating!

The last place we stopped was at the Visitor Center where I photographed the sculpture out front, then walked in and asked a ranger what the sweet pleasant smell was that I detected while walking on the mesas. He told me it was Mesquite and Juniper, and that I should be there after a rain when the smell intensifies! I also asked for verification about a bird we’d been seeing; the Western Scrub Jay – a cheeky fellow who unabashedly begged from us when we had a picnic lunch up on the mesa. The rest of the afternoon was spent resting, taking showers, planning our next locations – we made some big changes to our plans – and having dinner.