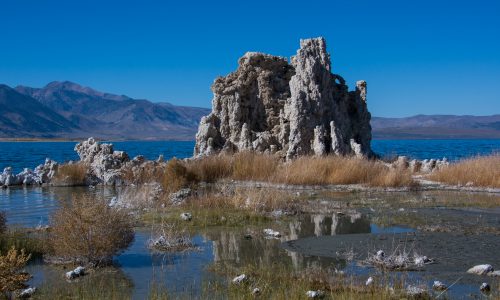 It was another very chilly night, the temperatures got down below 36. We broke camp at 7:00 and headed to Mono Lake, stopping along the Tiago Pass and taking some pictures. We also stopped and hiked the same trail we’d hiked last year in the Tuolumne Meadows. Some parts of the trail had been re-routed since they are trying to bring back the meadow, and we ended up hiking along a granite trail. The end of the hike was just as pretty as we remembered it though. Mono Lake is a large, shallow saline soda lake in Mono County, California, formed at least 760,000 years ago as a terminal lake in an endorheic basin. The lack of an outlet causes high levels of salts to accumulate in the lake. [Wikipedia]

What these salts do is create some really cool formations called Tufas. Alan and I hiked the one-mile trail around the edge of the lake and in and out of the Tufas that were on land (formerly of the lake, which has gone down some). One of the prettiest sights I saw was a plant that had been calcified in the lake. The contrasting white of the plant against the blue of the lake was stunning.