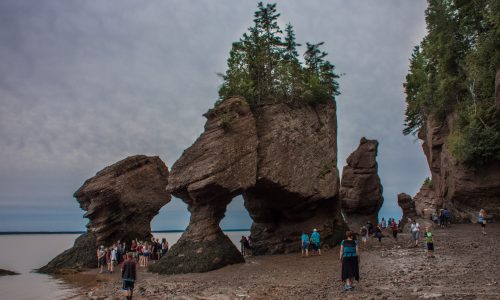 Before driving into New Brunswick, we stopped by Moosehorn Nature Wildlife Reserve and hiked a mile-and-a-half on the Charlotte trail, Woodcock, and Greg’s Pond trails, then as we drove out we stopped at a wildlife viewing area and saw Cedar Waxwings and a few other birds. Fundy National Park is a diverse little parked on the Bay of Fundy, fed by the Atlantic Ocean to the east and rolling hills and low mountains to the west. We arrived at Lone Pines RV Park, just north of the Fundy, late in the afternoon. Once settled we drove on down to the park and checked out the visitor center, then drove east to Hopewell Rocks, a natural formation popular with tourists and photographers.

When we arrived, about fifteen minutes before closing time, we were told we could park just outside of the park gates and walk to the Rocks from there, so we did. However, once we got to the entrance to the hiking path down to the rocks we realized it was getting late and we would most likely be hiking back in the dark. Without flashlights. We decided to return the next day and went back to the truck.

On the way to camp we stopped at a little restaurant called An Octopus’ Garden Cafe and feasted on Chicken Marsala while a couple of musicians played some nice cover music in the other room.

The next day we we drove the park and stopped to hike a few miles of the Cariboo Plains Trail.

Our next stop was Dickson Falls Trail which was a stunningly beautiful hike. I photographed more than just the falls. Afterward we rewarded our grumbling stomachs with PBJs up at Wolf Point. While we enjoyed dining al fresco, we saw groundhogs, red squirrels, snowshoe hares, and heard the weirdest sounds coming from crows in the forest.

From there we drove the Fundy Scenic Trail on the way to Hopewell Rocks. This time at The Rocks we parked inside the park gates and paid the entrance fee before checking out the visitor center and then hiking down to the Flowerpot Rocks. It is fascinating what nature creates. The formations here are astounding huge, huge boulders sitting atop very small forms looking like they could fall over with just a simple push, yet they don’t. The sea keeps carving away at them and I’m sure eventually they will fall, but probably not in our lifetime. As we were getting ready to hike back up to the parking lot we saw a few people looking up one of the steep cliffs. We followed their gaze and saw a Peregrine Falcon perched atop an old log. He just sat there waiting, we suspected, for a pigeon that was sitting farther down beneath him just inside a cave. Naturally we got lots of pictures of the falcon.

Once photos were taken we hiked the steep incline back up and out to the parking lot, got in the car and drove on back down to Fundy where we stopped for dinner at a small mom-and-pop pizza joint. It was some of the best pizza I’ve had in a long time.

On the way back to camp we decided to stop at Bennett Lake and hike Tracy Lake trail. Tracy Lake is north of Bennett Lake but we didn’t go that far, we simply hiked along Bennett Lake for a while hoping to spot some moose. Unfortunately there was a family at the lake frolicking in the water and making lots of noise, so we knew no moose were to be had this trip.