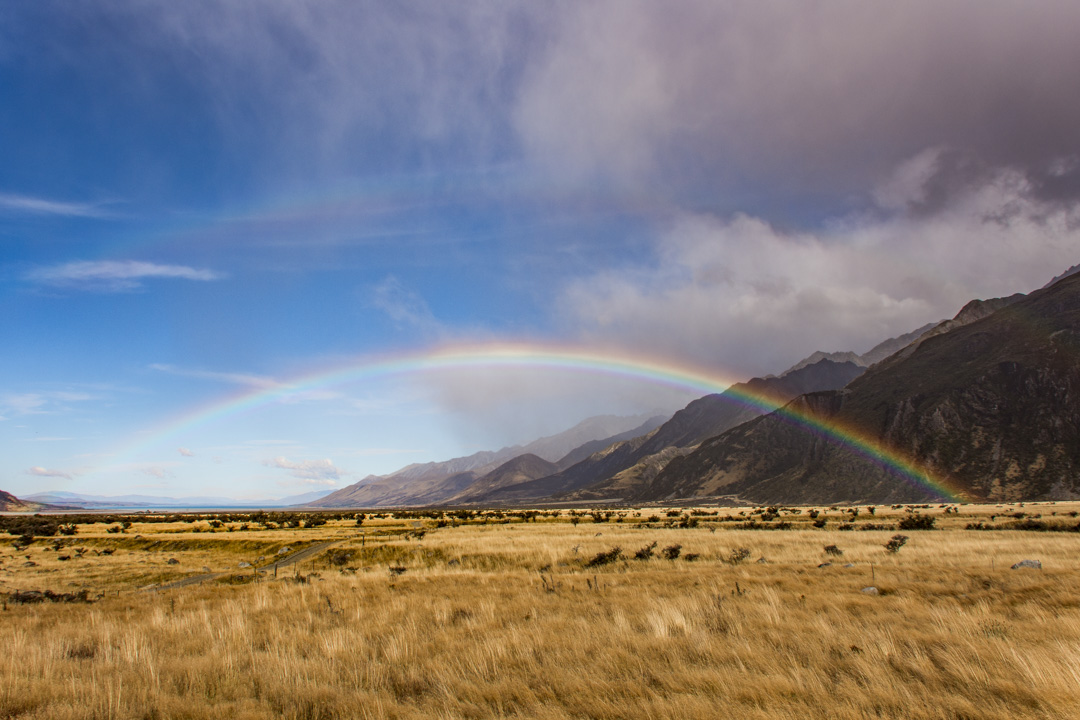 This morning we flew to Christchurch, New Zealand (on the South Island), where we traveled by bus to magnificent Mount Cook National Park. It is New Zealand’s highest peak.

At 10:30 that night I dragged Alan outside with my tripod and, despite ferocious winds, we found a gulley where I could set up and I got a couple of nice (not great) photos of the Milky Way.

Unfortunately, the helicopter tour of a glacier was cancelled due to high winds and rain. It almost looked like the 4-wheel drive Alan and I had also opted for would be cancelled roo, but at the last minute it was on. Since it was raining, we were taken out in a regular covered Land Rover. Our guide, Graham, was so much fun, and he took us out beyond the usual stopping point so we could hike up to the top of a push and look down on Tasman Glacier and the glacier’s lake. What a view! Along the way, both going and returning back to the hotel, we saw a number of rainbows. We can thank the rain for those.

In the afternoon we flew to Queenstown.

This morning we traveled to Milford Sound in the Fiordland National Park by bus – a (groan) 4-hour trip. Can you tell I’m about tired of busses by now?

We boarded a boat for a cruise along the fiord. It rained most of the time, but the rain gave us hundreds of waterfalls to marvel at along the fiord. We arrived at the Indian Sea and turned around to head back where we came from. Stunning is the only word I can come up with for this place.

Today Alan bungee jumped off of the first commercial bungee jumping bridge in the world. This has been on his bucket list for 18 years – the one thing he regretted not doing when he was here back in 1999. He did a spectacular job of it too!  I was a little nervous for him, but he was great.

After we got back to town we walked straight down to the docks and got on a KJet boat for a speedy ride up the Dart and Shotover rivers. The boat can go up to 80 mph (or faster in come cases) and do 360 degree turns on a dime – what fun!!! It was COLD outside, so it was a bit of a chilly ride, okay, beyond chilly, but so worth it.

Afterward we grabbed a bite for lunch, then walked to the base of a mountain for a ride on a gondola. The view of the Remarkables Mountains was unbelievable. It took my breath away.

At the end of the day we went with the rest of the group for a boat ride on a real steamship across the lake to Walter Peak High Country Farm for a delicious dinner.

We had to get up at an ungodly hour this morning to have our bags out for pick-up at 4:30am. We left the hotel at 5:30am to catch a flight. There seemed to be a mix-up at the airport and for several nervous minutes it looked like we wouldn’t be able to get on the plane. It all got cleared up in the nick of time though, and we were off to Rotorua, located on the North Island of New Zealand.

We were on our own for lunch, so we ate at Fat Dog, an eclectic little restaurant that our tour director had recommended to the group. Alan’s Dog’s Bollox Burger was HUGE! I swear, it stood 10 inches tall, at least. I had the B.L.A.T. (bacon, lettuce, avocado and tomato) and it was big too, but soooo delicious!

In the evening we enjoyed a Hangi Dinner (prepared like a luau or kovo meal), and a Maori Concert. During the concert the women were invited up to learn to dance like a Maori woman – I opted to be the group’s photographer – it’s always my excellent excuse. When they were done the men were invited up, Alan among them, to learn how to do a Maori Haka War Dance. Alan really got into it – what a hoot!! I have pictures I can use to blackmail him now.

This morning the group loaded up on a bus and we visited Rainbow Springs wildlife park. We saw a very sassy Kea – the world’s smartest bird – they can learn and may be as smart as a 5-year-old human. We also got to see Kiwis! OMG – so CUTE!!! We had to see them in a nocturnal setting, but we could still see them.

Afterward we visited Agrodome where we watched a sheep herding demonstration, then saw a show about sheep and sheep shearing. It was fascinating to watch the shearing and how the shearer can relax the sheep and even make it go to “sleep” by positioning it just so in order to sheer it without stressing it. Wow. I never knew there were so many breeds of sheep! One of our members got to go on stage and feed little lambs, and another got to go up and milk a cow. It was very fun to watch. We also learned they are breeding different dog breeds with Border Collies and getting some interesting results that they use for different types of herding needs. One of the dogs is bred to run over the tops of the sheep’s backs and we got a demonstration of that.

The last place we visited was Te Puia where we saw, and smelled (omg) thermal pools, mud pools, and New Zealand’s largest geyser. Afterward we saw how the Maori carve wood and weave flax grass.

Today we took the bus (one last time) to Auckland. Along the way we visted the Waitomo Glowworm Caves.