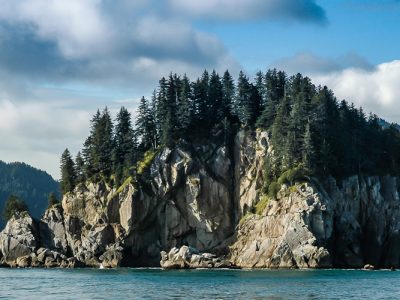 In 2011 my husband and I took a tour of Alaska. This was the first time I got a little serious with my DSLR. Most of the pictures were abysmal, but some have merit.

This was a trip that set me up to do things I’d never done before, like kayaking on the Sea of Valdese, in 40 degree weather. It was definitely cold, but it wasn’t miserably so.

We went out with a tour guide and one other person from our main tour group. The four of us suited up in dry suits of a sort, and kayak skirts, then squeezed into two tandem sea kayaks. This was a first for both my husband and I, we had never kayaked before – even though a friend of mine was an avid kayaker and constantly hammered at me to go out with her to try it out. It was very early in the morning, and so quiet. We launched from the docks in Valdese and paddled out several miles before turning around and coming back. The sea was a little rough, according to our guide, but we all handled it just fine. We saw sea otters, and curious sea lions who followed us a bit before going on with their hunt for breakfast. Getting into the kayaks was simple compared with getting out. The tide had gone out a bit and that meant the water up at the docks had lowered, making the struggle out of the kayak all the more difficult. I thank my lucky stars that nobody had a video camera to capture my awkward haul onto the deck of the dock. I looked like a clumsy walrus.

From Valdese we drove up toward Fairbanks via Wrangell-St. Elias National Park & Preserve, Tok and Big Delta, with a stop in North Pole. From Fairbanks we took the train to Denali National Park. In Denali we saw Grizzley, moose and Dall Sheep. We went on a white-water rafting trip and got our “glacial facials”, as our tour director teased us. That was another first for us.

From Denali we were back on the bus to Anchorage where we took a boat ride along Seward Bay and Kenai Fjords National Park. We saw Puffin, Dall Porpose, which look surprisingly like small Orcas, a Humpback Whale, Sea Otters, and so much more. We were also fortunate to see the calving of a glacier.

Alaska has so much more to offer, and I’m sure we will return someday in the not so distant future, but for now, these are some very precious memories.