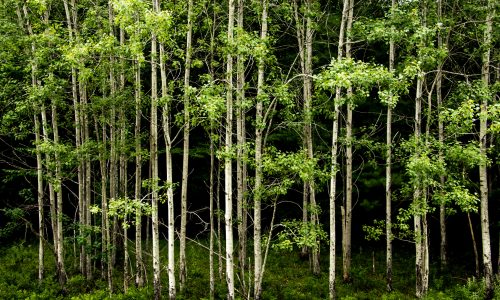 We got an early start for our long drive to Kejimkujik National Park in Nova Scotia. This trip we were going to be able to camp in the park, a first for us.

On the way we stopped at a camera store so that I could purchase a new lens cap as I had lost one of mine at Hopewell Rocks. Then since lunch was to be had along the way we decided to try a Canadian delicacy called poutine. For those unfamiliar with poutine it is french fries with cheese curd sprinkled on top and over that a rich gravy poured. Not for the faint of heart. To our surprise we found we enjoyed poutine, not quite enough to make it a regular feast, but something to be had once or twice during this trip.

Once we arrived and checked in, then set up camp, we took the truck and drove around a little bit to explore. We checked out the possibility of renting a canoe the next day, and with a little more driving we saw our first bit of wildlife, a deer.

Kejimkujik has the distinction of being a park that can boast a dark skies locale. Alan set this up so that I could possibly photograph the Milky Way in all its glory. The skies that day had been overcast and it had rained a bit so we didn’t hold out a lot of hope to be able to have clear skies at night. To our delight however late in the evening this guy’s began to clear and by 11:00 at night there was nary a cloud in the sky.

So in the dark we hiked over with flashlights and cameras to the Sky field not far from our encampment, and there it was, the Milky Way arm of our galaxy and every star possible in the night sky.

Alan help me set up the camera and tripod and I began shooting the Milky Way. While taking pictures I saw a shooting star and a couple of satellites crossing the night sky. The satellites look like shooting stars except they don’t move that fast and don’t have a tail. They are definitely not airplanes. They simply move steadily across the night sky and are much smaller pinpricks of light than an airplane would be.

While I shot my pictures Alan sat quietly and listen to the sounds coming from the nearby forest. He heard some crunching-munching sounds and just knew it had to be a porcupine. As I began to break down my gear and pack up to leave he came back from looking around and told me that it was indeed a porcupine and let’s try and get a picture. I adjusted my camera and had him spotlight the little guy and then we saw the momma! They were both climbing the same tree, the baby was higher up and munching on leaves, mama was down below keeping an eye on things and it looked like she was coming up to either check on him or get some food herself. Even though I only had my wide-angle lens with me we managed to get a shot of the mama – I just had to have Alan paint her with his flashlight. Alan was thrilled to have been able to check off seeing a porcupine in the wild from his bucket list.

The next day we nixed the idea of canoeing and instead hiked Mercy Lake Trail, a 4.5 mile hike along the beautiful Mersey River.

Afterward we decided to lay in some supplies and drove out to a Walmart about an hour away. Did I mention that Kejimkujik is remote?

After our dinner of canned chili one of our camping neighbors came by to borrow a can opener. His little girl was with him and told me it was her birthday and she had turned 5 years old. After they left I pulled out my craft kit and made a little bracelet for her. After having delivered the gift, and received thank yous, I returned to our camp. I had to chuckle though, because as I was going back to our camp I heard a little girl say to her mother, “I’m glad you forgot the can opener!”

We went to the dark skies field again this night, this time we were joined by our new friends. I set up to take pictures of the Milky Way and had three groups of people ask me how to do that. It was a pleasant feeling to be able to pass along information I had learned. Of course Alan had to check out the woods again before we left. He was rewarded by seeing the younger porcupine once more, but this time I had my long lens with me and we were a little more prepared to get a better picture.