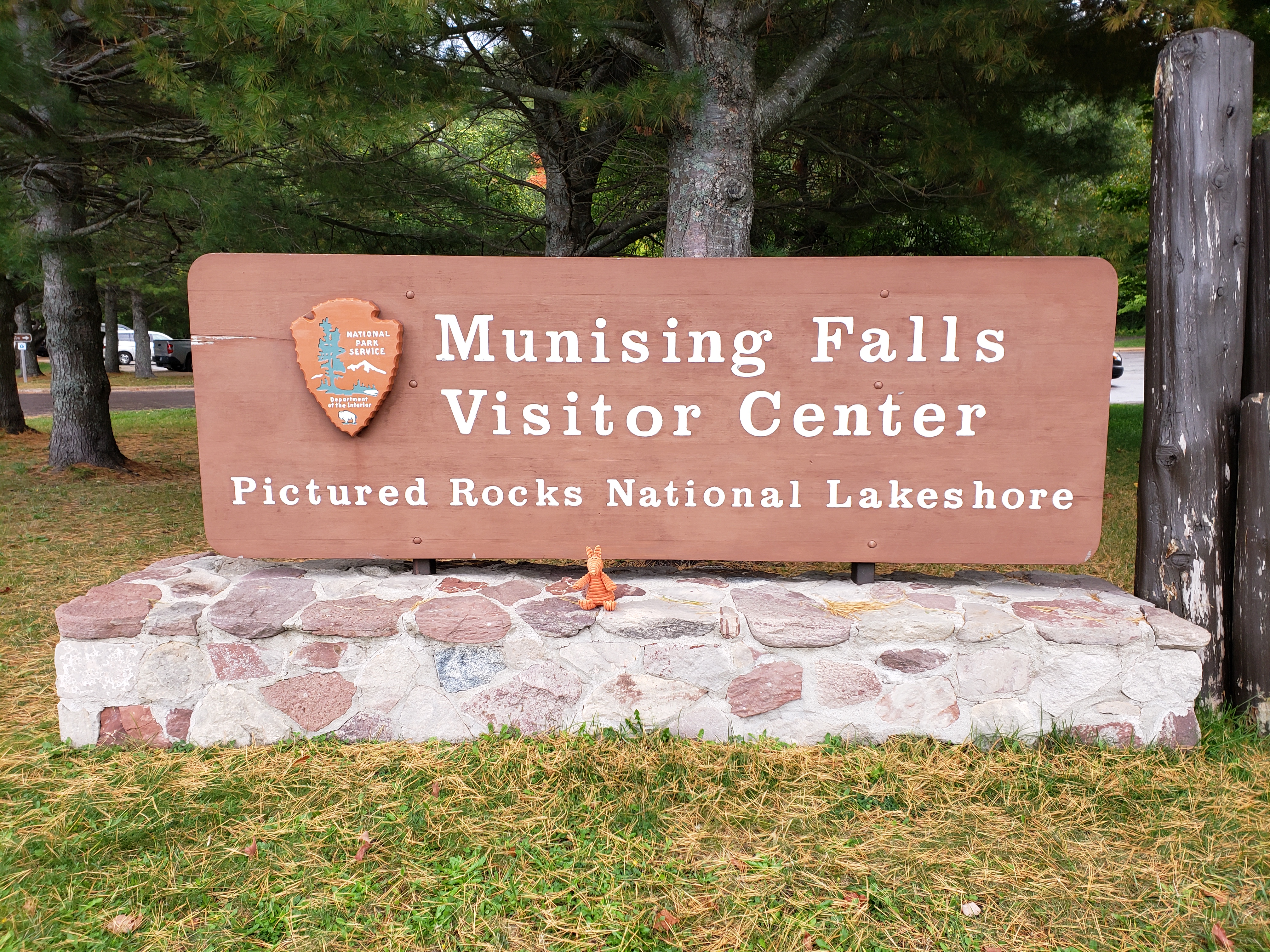 After checking in at the visitor center, and getting some good information about places to hike and get some great views in, we hiked a short trail to Munising Falls – right there at the visitor center. After leaving that trail we drove to the trailhead for Miners Falls where I took my time and got some pretty pictures of the falls. The trail wasn’t long, but getting down to the falls was slightly tricky – but we managed. Alan was a big help in scoping out different perspectives – one of my favorite photos is from almost behind the falls – just where he had suggested.

From there we hiked the trail to Miners Castle. It is a sandstone pillar somewhat separated from the cliffs, making it appear like a castle turret. There were a few places along the hike/walkway that allowed a view from above, then you could follow the trail down (way down) and come right up close to the top of the pillar. The walk back up wasn’t fun, but it was a good workout.

After Miners Castle we drove to Mosquito Falls’ trailhead. The road was unpaved and rather rutted, but Alan handled it perfectly. The hike to the falls was tough; it was either muddy, or boggy, or thick with roots – there was no in between on the 1.75 mile trail. This was the longest trail we hiked to a waterfall this day.

The falls were in two parts, the first was about four feet high and difficult to get a decent angle on with the camera. The second was another quarter mile further on the trail and taller and prettier.

The hike back was no easier than it was going in, but it did seem to go faster. We were glad to see the parking lot when we finished. Our hiking boots were caked with dark mud and required a good cleaning when we returned to camp.

Today was a rainy day so we made it a catch-up day. We ate bagels at a place next to a laundromat while we did our laundry.

The great thing about the RV is that once you are done with your laundry you simply put it away in the RV. We have a very good system for our clothes; we use travel packing cubes to keep our shirts, socks, underwear, and pants separated from each other. This keeps them from tumbling out of the overhead cupboards, and makes finding what you want much easier.

After laundry, we headed to the town’s library to catch up on blog notes. Most town libraries provide free wifi – and so far we have been lucky with signals. This town library was part of their middle school – which is pretty efficient when you think about it.

Lunch was a Picture Rocks Pizza. They had GREAT wood fired pizza! We really wanted to go back for dinner and lunch the next day, it was that good. The way it worked was you walked in, told the cook/owner what you wanted and he assembled it right there in front of you, then put it on the counter for its turn in the pizza oven. We took our seats and before we knew it he brought us our pizza.

The afternoon was spent chilling out in the RV and I made sure to clean it – it was dusty and dirty inside as well as outside – the outside would have to wait though. Part of my cleaning involved defrosting the refrigerator which had a thick coating of frost on the upper elements. I turned the frig off and pulled all the food out and tucked the perishables together in the sink. Then I heated some water in bowls in the microwave and put them inside the open frig. It took several microfiber towels and reheating the bowls of water, but within an hour I had it defrosted and the food went back in after I turned it back on.

This morning we got an early start and hiked another short trail, this time to Wagner Falls, which were impressive. With the rain from yesterday they were heavy with water.

From Wagner Falls we drove to the Grand Marais side of the park. We checked out Google Maps for possible Milky Way shoot locations. Next we drove to the visitor center where I talked with the ranger about being out late taking pictures of Milky Way and Northern Lights – we didn’t want to have any problems with the RV making the authorities think we were illegally boondocking. I was told it wouldn’t be a problem since they know that when there is a Northern Lights alert there will be all sorts of people out very late into the night.

We left the visitor center and decided to have lunch in Grand Marais which was a bit of a disappointment.

Heading west out of Grand Marais we scouted out Hurricane River Campground and Twelve Mile Beach for places to see the aurora, then hiked to Sable falls – another pretty waterfall in the park.

Afterward it was time for some rest back at camp and prepare for our hoped-for Northern lights viewing deep in the park. We prepped the camera gear and left at 7:00pm, arriving at Lake Superior Overlook at Twelve Mile Beach trail just past 8:00pm. Alan parked the RV and we turned on the heat, turned out the lights and tried for a nap. The Aurora wasn’t expected until around midnight so we had some time to kill. We couldn’t sleep though. Lots of vehicles came and went in the parking lot, but we were the only vehicle that stayed the whole time. Eventually a few other cars showed up – both with serious photographers, tripods, and gear.

At one point I decided to shoot the Milky Way from the parking lot – and got a few good pictures of it. We were in total dark sky territory making star gazing easy.

At 10:00pm we started making trips out to the overlook to see if anything had started, but we got bupkis each time. At 11:00pm the second photographer that showed up had set up his gear to photograph star trails around the northern star – with hopes of catching the Aurora in the background. He and I traded war stories, gear talk, and more. Alan went back to the van – all that tech talk just wasn’t his thing.

At 11:55 we started to see something faint in the distance. I trotted off to the van and got Alan. We watched and photographed the Aurora for the next hour. It was faint to us, but the cameras were picking up a lot more of the lights making for some nice photos.