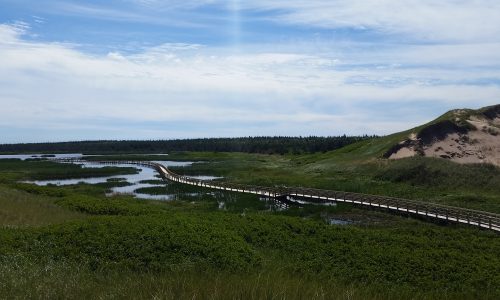 We took it easy in the morning, having breakfast at a Chinese restaurant- they serve a traditional American breakfast then switch to Chinese food the rest of the day. What a hoot!

This Canadian province is beautiful, in summer it is lush and green with gently rolling hills. We looked forward to our stay here.

We arrived at the KOA near Charlottetown, set up camp, then we had leftovers for dinner, and Alan had Ramen noodles for the first time. He declared them, “not bad”.

Today was Alan’s 60th birthday. I cooked bacon and eggs for him for breakfast, and we split a banana and a pack of pop tarts. This, he stated emphatically, was an ideal breakfast.

Later in the morning we hiked 3.5 miles on the Greenwich Dunes Trail at Prince Edward Island National Park. This trail was beautiful! We could not get over the views. So very, very pretty. Afterward we had lunch at Holy Cow, enjoying bacon cheese burgers, before returning to camp.

Alan wanted to see a movie for his special day so we went to see War for the Planet of the Apes, then I took him to dinner at Peake’s Quay, a nice seaside restaurant in Charlottetown. The food and atmosphere were fantastic. Alan noted, with a happy grin, that he’d had bacon at every meal this day.

Back at camp we shared chocolate cupcakes. Being without candles I lit a match and stuck it in his cupcake for him to blow out while I sang Happy Birthday to him.