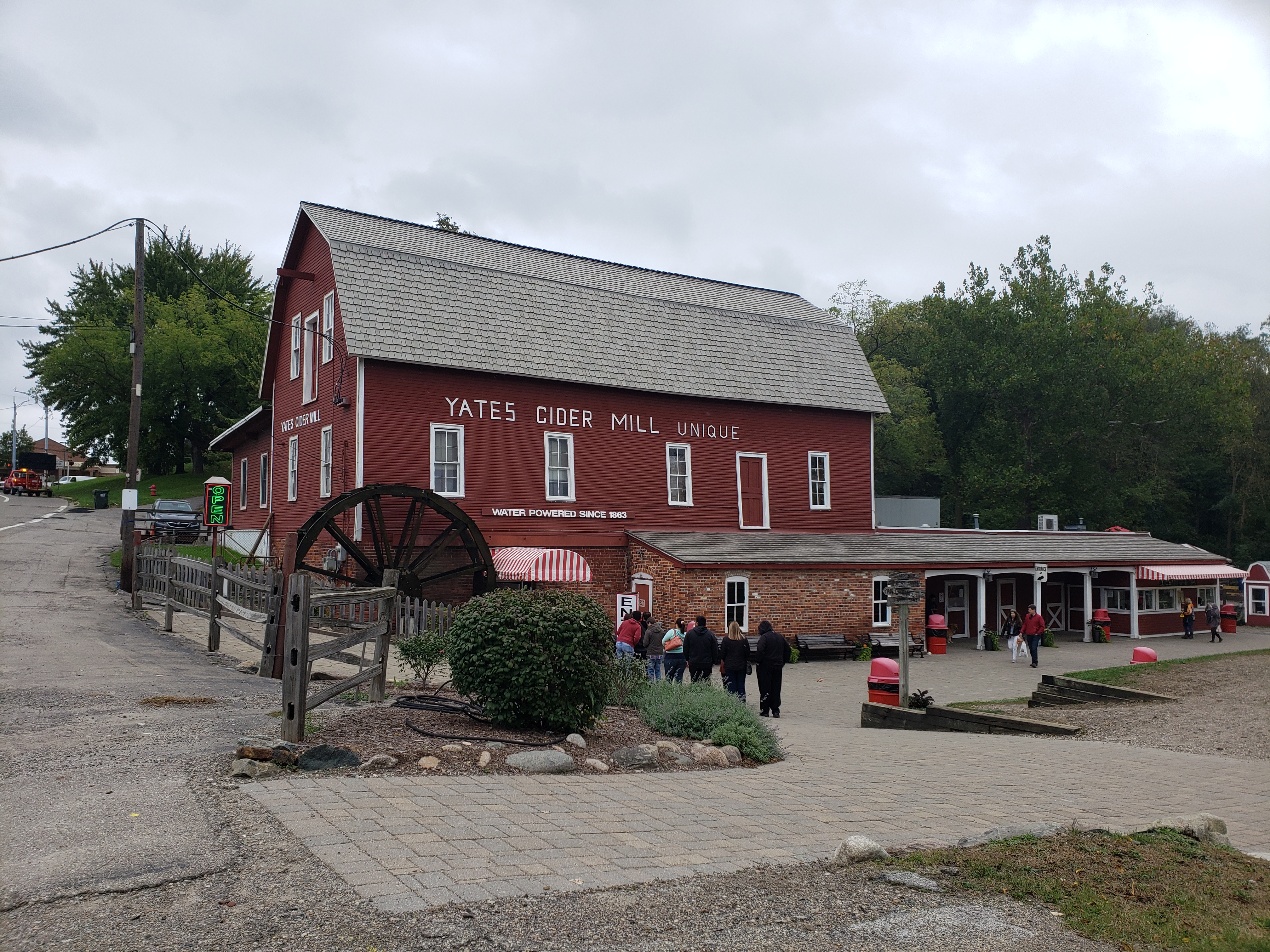 On the way to Rochester I messaged my niece to ask for an appointment to have her wash my hair and give me a blow out. She had gotten a job at a nice salon in downtown Rochester and was eager to show it to me – this was my way of seeing where she worked, and getting a little “spoil me” time in the process. It would also help to provide her with some work. 🙂

The 2.5 hour drive toward my old stomping grounds in Rochester was uneventful. We took our time and arrived at the Four Corners Diner in Romeo (just north of Rochester) to meet an old high school art class friend, Anita Stewart. We sat for several hours catching up on each other’s lives and sharing stories. Anita is a grandmother several times over and loves her kids and little ones to death. She and her husband own and run an auto shop franchise but they dream of retiring to the west side of the state in the near future. It was fun to see her again. Before we parted Anita gifted me with a handmade necklace of tiny river rocks and a handmade crystal pendant. Both pieces are very pretty and detailed, she was, and still is, a very talented artist.

We had booked a campground at Addison Oaks County Park, not far from where my sister lives. We checked in after lunch and found our spot. I texted my sister, Teddi, to see when she’d like to have us over (she’d invited us to dinner at her house), then we kicked back and took it easy for the afternoon.

One thing about Rochester and Oakland County that we found out pretty quickly was the condition of the roads. They were a mess. If they weren’t under construction they were full of pot holes, ruts, or even unpaved (still). These conditions were not the best for the van, so we started driving miles out of the way to avoid them.

We arrived for dinner at Teddi’s around 4:30 and spent time chatting, then enjoying a home cooked meal. It was a very pleasant evening.

Since we didn’t have much to do, we took a short walk, then headed into Rochester for my hair appointment with Emma. She was so proud of her job and salon, and with good reason – it’s a pretty nice place.

We chatted while she washed and dried my hair. She was getting ready to leave for a salon show in Columbus, Ohio over the weekend where she would learn new techniques and pick up a few new tools of the trade. She was very excited to be going.

I paid the salon and gave Emma a tidy little tip, then walked a few blocks back to the van where Alan was waiting for me.

When we left the salon we drove to Yates Cider Mill (the original location) to pick up cider, donuts and some hand pies. Great memories.

From there we went to a dog park where there were some nice trails and we walked a few miles, then changed clothes to go meet my sister at Palozzo Di Bocce for dinner and some Bocce Ball – this time it was on us.

The restaurant was very nice and the food was terrific. Afterward, Teddi had made reservations for us to play 80 minutes worth of Bocci ball. I’d never played before, but turns out I was okay at it. I beat the pants off of Alan, the athlete. Ha!

We all had good time and said our good-byes with plans to meet for dinner on Sunday.

After leaving Teddi, Alan and I drove to Emma’s to see her new (and first) apartment. She and her girlfriend, Nonni, had done a good job with fixing it up. Before leaving we wished her a safe trip over the weekend, then we headed to the campsite and bed.

Since we were on a national historic places tear, we decided to drive south of Detroit and visit River Raisin National Battlefield Park.

River Raisin NBP commemorates the January 1813 battles of the War of 1812 and their aftermath in Monroe and Wayne counties. The park’s website tells the story thus:

“On the morning of January 22, 1813, nearly 600 British and Canadians and about 800 Indians attacked the sleeping American soldiers along the River Raisin. Although surprised, the Americans quickly returned fire. In just 20 minutes, the right flank, where the U.S. 17th Infantry was stationed in an open field, was routed and forced to run across the frozen waters of the River Raisin towards Ohio. Of the 400 Americans who ran, about 220 were killed and 147, including General Winchester, were captured. Meanwhile, the American left wing, which included nearly 500 militiamen, continued to fight from behind the Frenchtown picket fence. Successfully repulsing British attacks, the Americans expected the British to ask for a cease-fire when they saw them waving a white flag. The Americans were shocked to find out that the British had instead carried a message of surrender from their General Winchester. After a short negotiation, the remaining American forces surrendered. The British quickly withdrew due to heavy casualties and the expectation that the Americans were soon to be reinforced by General William Henry Harrison’s troops, who were along the Maumee River near present-day Toledo. When the British departed, they left the Americans who were too wounded to walk in the homes of Frenchtown inhabitants under the guard of a small British detachment and Indians.

“The morning after the Battle, Indians returned to the River Raisin plundering and burning homes, killing and scalping many of the remaining Americans, and taking others as personal property. Official U.S. estimates of the aftermath include a dozen named individuals killed and up to 30 more who were probably killed in this manner. British estimates put the number at about six.

“The Battle ended in what was described as a “national calamity” by then General William Henry Harrison, and later President of the United States.”

There was a nice path to hike, but we kept it short and headed back to Rochester.

Later that evening we met several of my old friends from high school (Sheryl Hugger, and MaryJo and Mark Stevens) and had dinner. The evening was spent catching up a bit, talking about health issues, and then nerding out on sci-fi stuff. Not much different than high school. Fun stuff.

We got an early start and drove to the Detroit Zoo where we hoped to see an aardvark and maybe a red panda – bonus – we would get a lot of good walking in.

After paying for tickets we made a bee-line to the very back of the zoo where the map said the aardvark was supposed to be. Along the way we stopped in the Asia section to check out the red pandas exhibit. We saw one sleeping in a tree, so we continued on to the aardvark exhibit, but didn’t see the little guy anywhere. We were so disappointed.

Not wanting to give up, we decided to check out the rest of the zoo and then return to both the aardvark and panda exhibits. We saw gorillas, tigers, giraffes, lions and more. Once we’d had our fill of the other animals, we went back to the aardvark exhibit and there he was! A real live aardvark! We were so psyched – and I took loads of pictures (he moved around the enclosure at a pretty brisk pace). At one point he disappeared inside the building adjoining his little habitat. We waited patiently for him to come back out. Suddenly there were roars emanating from the building! We looked at each other and laughed. Roaring Aardvark! (my company’s old name). Turns out the little guy shares the building (but not the same room, obviously) with the grizzly bears next door. Haha!

Eventually he came back out and we enjoyed him some more before heading to the red panda exhibit again. When we arrived we saw not one, but two red pandas crawling around in the trees. They kept moving about, but I managed to get a couple of decent pictures. They are so cute. What a treat!

When we got back to camp we did a load of laundry and relaxed before taking my sister out to dinner at Hibachi Restaurant downtown Rochester.

The cook put on a good show and we enjoyed each other’s company and the good food.

All-in-all it was a good visit, and I hope to return again in a few years.