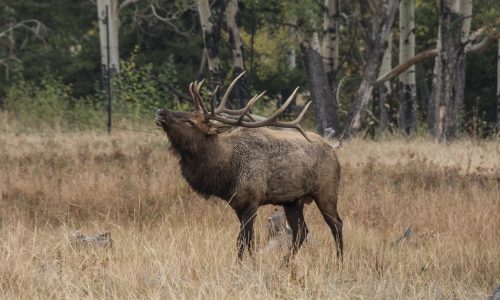 We arrived at the KOA, set up our tent and met our neighbors – Mike and his sister Chris. We made a beeline to Rocky Mountain National Park but by the time we got there the visitor center had closed. We turned around and hit a grocery store for some items then returned to camp where I cooked up a big tasty pot of chicken soup for the cold night ahead.

A mule deer and an elk kept me company in the field just across a dirt lane near our campsite. The doe was not very afraid of me and came up looking for a handout – which was not forthcoming. Later Mike, a fellow photography enthusiast, and I sat at his picnic table with our laptops sharing photos and tips and stories. Before I knew it, it was nearly 10:00! Time for bed.

It was a cold night, but our little space heater kept us warm and we headed out first thing in the morning to hike Bear Lake, and then we hiked up to Nymph Lake, a half-mile 260 ft. elevation gain. We wound up at 9,200 foot elevation and we both could feel it. We were winded. That hike up to Nymph Lake felt more like a mile and 800 ft. elevation gain. Despite my sciatica acting up, and my knee complaining, I got there and even contemplated going up another half-mile to Dream Lake, but Alan convinced me not to go. We left Bear Lake and drove down through the park to explore and discover the Aspen and the Elk which were in the height of their breeding season, a.k.a. RUT. As far as the elk were concerned, we were not disappointed at all. Our first experience at the park was with a huge bull elk who had a very large harem of cows. He was full of himself and was not about to let anyone, human or elk, near his girls. The next “show” we saw was this same bull elk snagging four cows from three other young bull elk because they got just a bit too close. The three younger elk seemed to not know what to do after losing their girls, but they definitely knew not to challenge the bigger fellow. Alan and I noticed some areas that were fenced off in the meadows. We never did find out what they were for, but Alan had some fun with them. The last viewing we had of some elk were of another big bull with a huge harem of cows, and two other bull elk bachelors nearby. He ended up running at the other two, but not before I fell down on the pavement, hurting my knees and banging my camera so bad that the auto-focus ceased to work. Fortunately, after some fiddling around with the camera, it got it in proper working order again. Whew! Love my Nikon! It rained all night long, and was still raining when we got up. We thought that breakfast at McD’s would fit the bill and we passed some time there waiting for the rain to let up enough to break camp. It finally stopped raining and we went back to camp and broke down. Halfway through our efforts it started to sprinkle a little bit, but we are efficient at this and got it done before anything got overly wet.

Once we were back in the truck we headed to the park and inquired about road closures. Naturally, the roads we’d planned to take around the park were closed due to snow and ice. We fell back to Plan B and headed out on the Peak to Peak Scenic Byway (highway 7 mostly). I used this opportunity to look for some “just right” settings of golden colored Aspen. We found several that almost fit the bill, and I took lots of pictures. We also hiked around a pretty lake, socked in with clouds and mist, and cold as a witch’s heart. After driving the Byway we went back to Estes and got a good hearty hot lunch to warm us up. Soup and tea for me please! From there we drove to the library where I spent the next few hours catching up on this blog.

In the evening we went to check in to The Stanley Hotel. Well known as the scene for Stephen King’s book, The Shining. It is an historic hotel listed on the National Register of Historic Places, and purported to be haunted. Alan took me out to dinner to The Twin Owls restaurant – we got to wear the fancy duds we’d brought with us for the first time – then we went on a haunted tour of the hotel. Fun. The Stanley offers a few different tours, one of which is a night-time haunted tour, which provides insights into different locations of the buildings, history and stories. We were shown how to do a paranormal exercise to do with simple #2 pencils. I did this with one of the other tour guests and it freaked me out!

Our room at the Stanley was so warm we had to open all three windows and turn on an oscillating fan even though the temperature was 50 degrees outside. With those measures in place we both slept well.