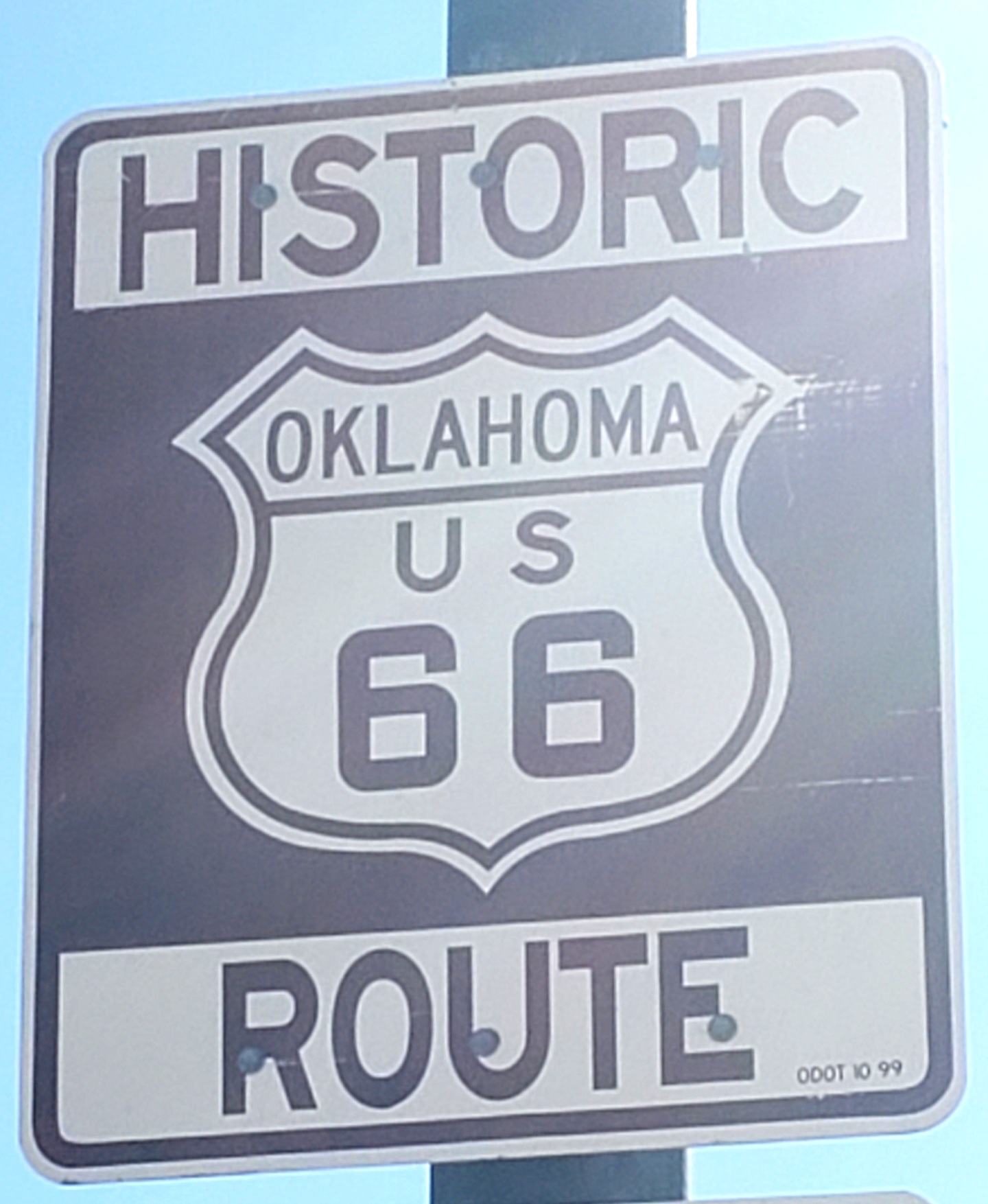 We passed into Oklahoma and stopped at Waylan’s Kuku restaurant, but my stomach was upset, so we didn’t get anything to eat. Instead we stopped at a Walmart for a sandwich for Alan and some groceries.

We went on to Chelsea and visited Ed Galloway’s Totem Pole Park.there were an odd assortment of Totem poles and carvings. One of them was at least three stories tall.

I snapped a picture of the Blue Whale of Catoosa as we drove by, and in Tulsa we saw the Golden Driller statue.

About this time the rain stopped and we saw blue skies for the first time in a week! There was this strange bright yellow light in the sky too.

I snagged a couple of pictures of the Waite Phillips-Barnsdall Station Museum in Sapulpa. Then the Rock Cafe, a 66 Monument, and a Coka Cola wall mural in Stroud.

In Arcadia we saw the famous Round Barn, and then we visited POPS Soda Ranch. That was a really cool place!

Our day was done, so we spent it at Twin Fountains RV Park.

Our first three stops were in Oklahoma City. The Milk Bottle Grocery was a tiny building set out in the middle of a side street intersection. It had a nice mural on one side too. The bottle was an advertisement for Braums, a widely know dairy producer, and also a fast food restaurant chain.

Next up was the Centennial Land Run Monument. This commemorates the opening of the Unassigned Land in Oklahoma Territory with the Land Run of 1889. Using bronze for his sculptures, artist Paul Moore captured the exciting energy with 45 figures of land runners. Also included are horses, wagons, a wolf, and a jackrabbit. To the rear of all this frozen-in-time commotion, are two men and a cannon, presumably the “starting pistol” of the race for land. The sculptures are all two times life size. Hoof prints can be found on the creek bed, and even in a part of the sidewalk, where the sculptures look as if they have crossed.

We left the downtown area and headed for the Lake Overholser Bridge. Starting in 1925 this bridge replaced a ferry system and became a critical infrastructure for Route 66 traffic. In 1956 the bridge was replaced when traffic on the route became heavier.

We drove to Bethany to find Nutopia Nuts, but all we found was an old faded sign.

On the way to our next destination, we saw Yukon’s Best Flour. In Hydo we snapped a picture of Lucille’s Route 66 gas station. Then on to Weatherford where we visited the display of a wind turbine blade. Weatherford has a plant that manufactures turbines. It is also the hometown of astronaut Thomas Patten Stafford, one of only 24 people who have flown to the moon. Then, in Clinton, we drove through the McLain-Rogers Park arch – a nice sign in the old art-deco style.

Tired from lack of a good night’s sleep, we settled in at a KOA in Elk City for the night.

We drove toward the town or Erick, and on the way in we saw some cool old rusted windmills. In Erick we stopped to see the Sandhills Curiosity Shop. It wasn’t open, but it did provide for some cool photos. There were a couple of other unique spots here as well, so I took some pictures of them.

From here we passed into Texas.