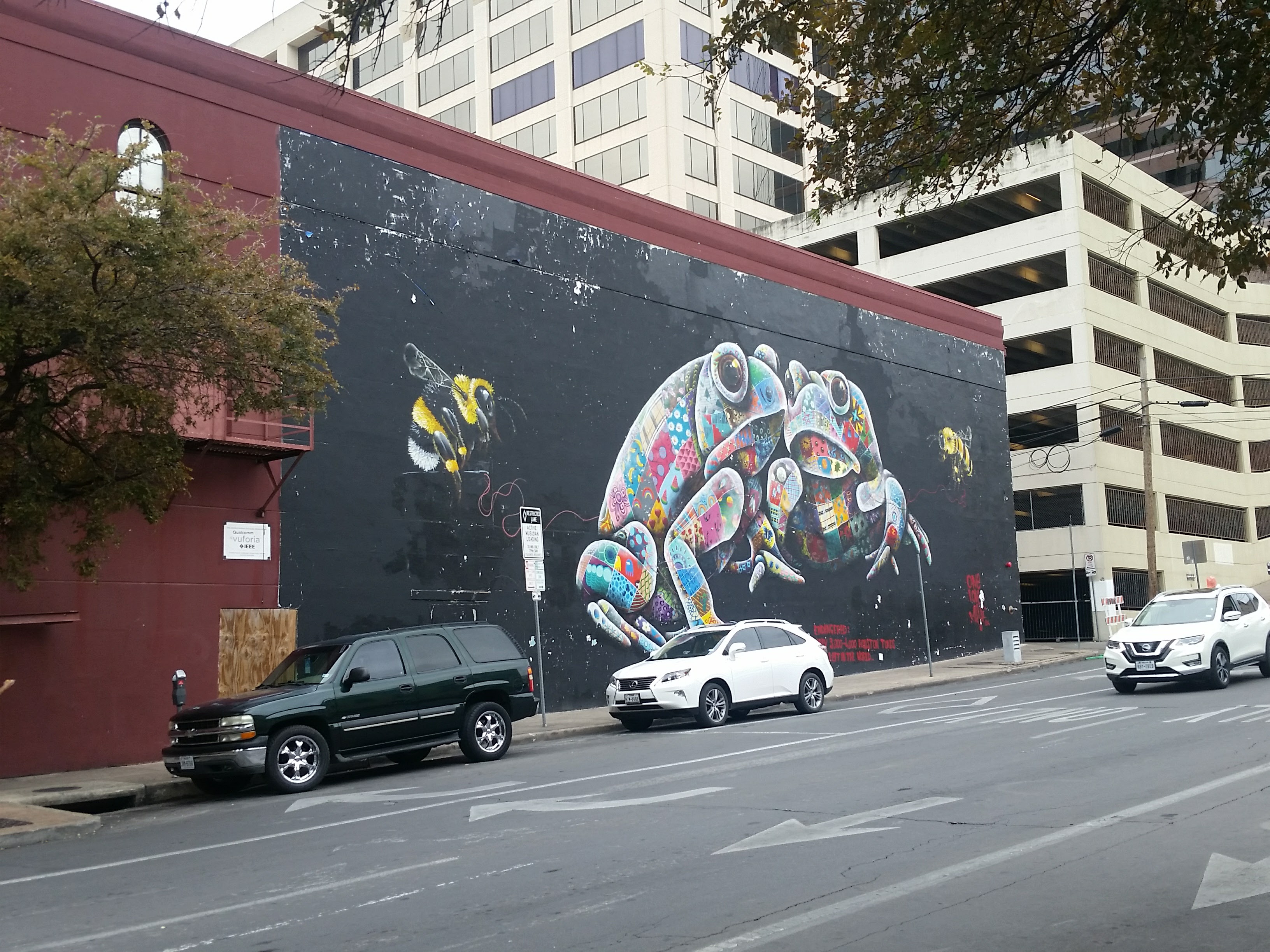 We arrived in San Antonio and went to Mi Tierra Cafe & Bakery in the center of downtown for dinner. It was like Christmas in Mexico. Lights and decorations everywhere making the place very festive. Mariachi bands playing tunes in the bar and in two other parts of this large establishment. The food was good, and despite the long wait for a table, we were served our meal in good time. After a breakfast at IHOP, where I ordered the 55+ breakfast, making myself feel “old”. We drove downtown and found some parking then walked to the Alamo where we took a self-guided audio tour. It was interesting learning all about how Texas became one of the 50 United States, and where the term “Six Flags Over Texas” comes from. From the Alamo we walked the Riverwalk. Once we figured out where were heading it was a very pleasant stroll. We had lunch at Boudro’s where I enjoyed a Prickly Pear Margarita. We’d heard about some haunted train tracks in San Antonio where supposedly, if you stop your car on the tracks, ghost children will push it off so you won’t let hit by a train. According to urban legend a bus loaded with about a dozen children stalled on the tracks and couldn’t get off in time, hence the ghost tracks at that location. Naturally we couldn’t resist checking it out and stopping our truck on the tracks – but a train really was coming and Alan wasn’t about to trust a bunch of little ghost kids to get us off in time. Dinner was Texas BBQ at the County Line – another eclectic location that we’d heard about but, we weren’t too impressed.

We drove to Austin and arrived in time to have lunch at Chuy’s, a funky, eclectic joint that Alan liked from when he worked in the area many years ago. Lunch was tasty. Since it was too early to check in to our hotel, we checked out downtown Austin. Congress and 6th Streets in particular. We drove by the bat watching parking lot too. On 6th Street we went into Voodoo Donuts because A) I wanted some donuts, and B) I had to use the restroom. Really bad. We ordered 6 really sweet big donuts: 1 Captain My Captain (made with Captain Crunch cereal), 2 Old Dirty Bastards (made with peanut butter and crushed Oreo cookies), 1 Dirt (made with crushed Oreos), 1 Neapolitan, and 1 Marshall Mathers (made with miniature M&Ms). We will enjoy these over the next few days. Dinner was at La Tierria Guadalajara. We were the minority for the evening when we walked in. It is hugely popular with the Hispanic community, which is a great thing – it meant we’d be getting authentic Mexican food – and we did. It was delicious!

We spent a good portion of the morning hunting around Austin for a sugar skull that I wanted to take home as a souvenir. We’d looked in Mexico, west Texas, and San Antonio with no luck, and we had no luck looking around downtown Austin either. Below is a ceramic version of a sugar skull – similar to what I was looking for. We had lunch at Torchy’s Tacos – they were expensive, but delicious – and each taco they make is very unique. Afterward we tried to go to a few places for the sights, but all were overcrowded. We finally went to Mayfield Park and hiked about a half mile, and I took photos of peacocks. After that we tried one more place for a sugar skull and finally! I found what I wanted. Yay!

Dinner was at the Salt Lick in northern Austin. What a place! And GREAT BBQ too! We left there stuffed to the gills.