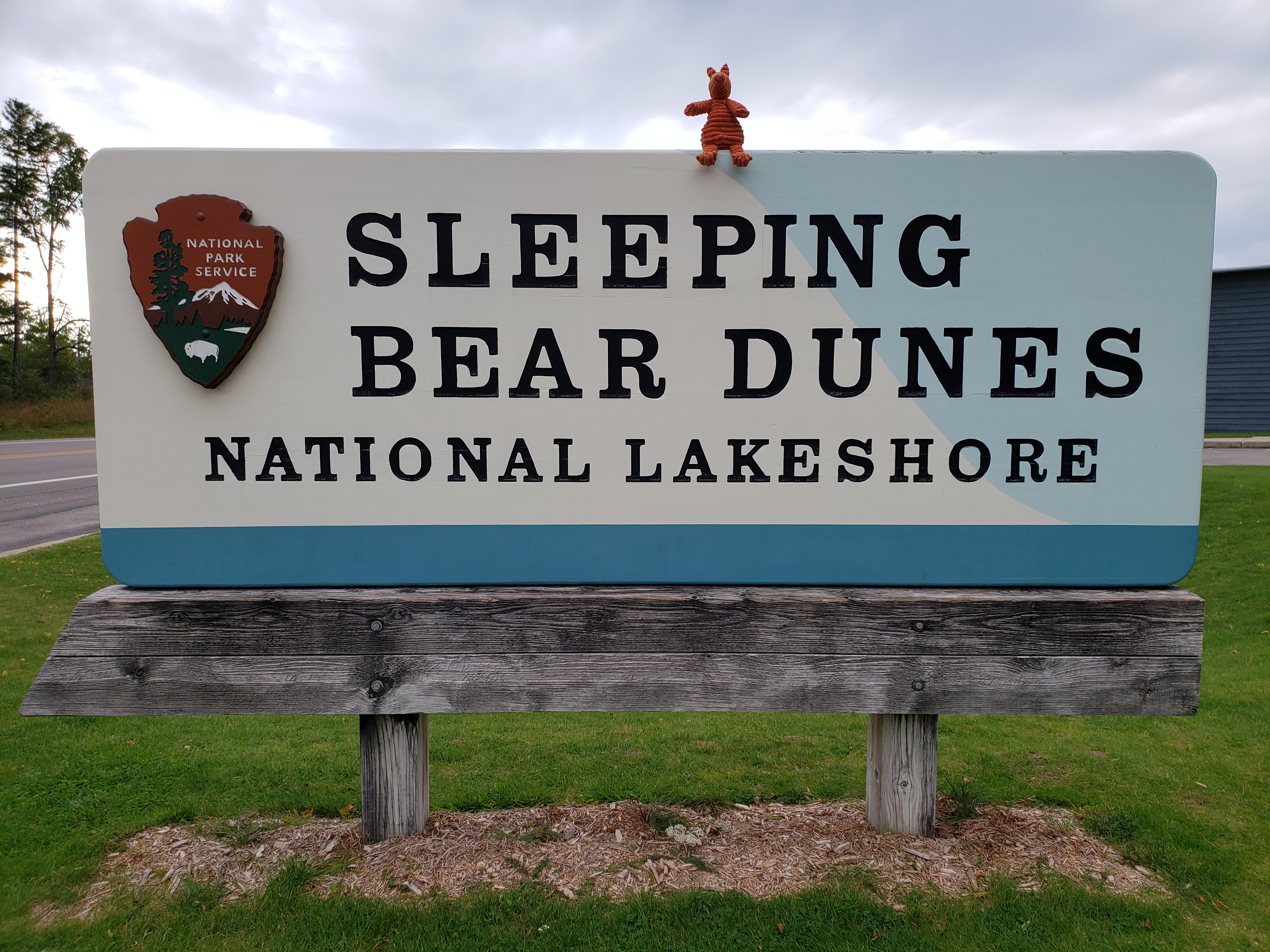 Since it was only a few hours to our next destination, we took our time getting up and out. Once we were over the bridge though, we stopped at Alexander Henry Park where I took morning shots of bridge. I was hoping for some long-exposure shots that would smooth out the water and make for an interesting shot, but with the overcast sky it just all became one color.

We continued on to Sleeping Bear Dunes park and checked in, getting the stamp in our book, a pin and a sticker, then we drove the Pierce Stocking Scenic drive. It was a very pretty, winding drive that culminated in trail to a stunning overlook of the dunes and Lake Michigan.

Leaving the scenic drive I decided I was feeling pretty good about ascending a big ol’ dune, so we drove northward to the Dune Climb trail.

The dune is about 188 feet high, with a short slanted top before you finish the remainder of the dune. It is steep and considered strenuous by hiking standards. I was feeling pretty spry. With all the uphill hiking we’d done the last few weeks, I felt like I was in better condition to tackle this climb.

While it wasn’t easy, and I absolutely hate walking, or climbing, on sand, I did it. I stopped twice to catch my breath, then marshalled onward and upward. When I reached the first level I looked over at Alan, who was breathing hard too, and said, “Well, we’re here. No regrets, right?” and started up the second, shorter, slope. After making that I ascended a very short bluff to the top and quietly celebrated my joyful achievement.

Going back down was easier, and on the way Alan asked me to take another picture, then he lay belly down in the sand and made like he was crawling across the barren desert, gasping for water. He’s so silly.

After checking in at our next campground, we went to Village Park in Empire for some sunset pictures.

We got up early-ish, and had breakfast, then drove to Empire Bluff Trail for a quick hike. Rain was expected this morning and would last into the next day. The trail was well kept and easy, except for the steep uphills – Alan was feeling a bit off today so it affected him negatively. But he gamely kept up with me and my newfound love of hiking up hills. The reward at the end of the one mile trail was another beautiful view of the dunes and Lake Michigan. We hung out at the top until we heard some other people coming up behind us, and then turned back. About halfway down we came upon two older couples who looked like they were struggling a bit. One asked if it was worth it and I replied that it definitely was and pointed over my shoulder to the first stunning view they would see.

By the time we reached the parking lot it was starting to sprinkle, so we decided to kill some time around Traverse City and have lunch at Culver’s, a fast food place we’d noticed all along our trip. The menu offerings were good and so was the food. I tried the fried cheese curds, which turned out to be quite tasty, but unfortunately, heavy in calories. I figured this would be a one-off.

From there we hit several stores; Meijer’s, Kohl’s, Target, in search of some Espadrille shoes for me. I found some at Meijer’s but not in my size, so I figured I would search other Meijer stores when we saw them. I did manage to pick up a couple of long-sleeve quick-dry tops.

Since it was Date Night Tuesday, we went to see the movie, “Ad Astra”, then had dinner at Joe’s Friendly Tavern back in Empire.