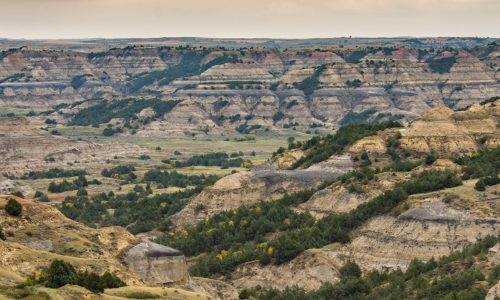 From Billings, Montana we drove to Theodore Roosevelt National Park  and got a room and a local motel. So as not to miss anything because of weather – which was again predicted for rain and overcast skies. we drove the loop of the South Unit. Happily we saw lots of Pronghorn on the way. Once we were on the loop we saw wild horses, prairie dogs, three coyotes, bison, mule deer, white tail deer, quail, and a Ferruginous hawk. The vistas at this park were amazing – the striations across the mesas and buttes looked like someone had scraped them in with a huge fork. We found a couple of short trails and hiked them. One took us through a prairie dog town.

Drove out to the Painted Canyon but since it was so dreary out it just didn’t look all that wonderful.

We got up early and drove out to checked Prairie dog town but they weren’t up yet. Alan has been hoping to see a badger, and I wanted to see Burrowing Owls. No such luck.

We returned to town and had breakfast at a place called Trappers. It was the best breakfast we’d had in weeks!

After breakfast we drove to the North Unit of the park and did the loop. Much more impressive scenery than the South Unit, but fewer critters.