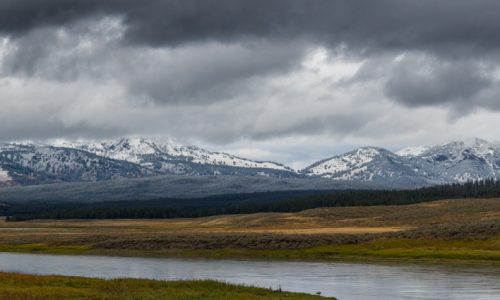 Despite the overnight snow, the roads were clear enough to drive on and we headed into Yellowstone National Park as early as we could. As we drove into the park we saw Pronghorn, Elk and Bison, along with Mule Deer. The snow made everything very pretty, but by afternoon it had melted away.

We made the obligatory visit to Old Faithful and stood and watched when it erupted. Listening to some kids nearby as it erupted was more fun than watching the geyser itself. We also stopped at Grand Prismatic Springs, but it was so cold outside that we couldn’t see much of the surface of the springs because of all the steam rolling off of the hot waters. It lent a very eerie feel to the location. From Old Faithful we drove north on the loop around the park and stopped at some waterfalls and other overlooks, as well as stopping for photos of animals. It was late when we got back to the hotel.

It was a clear day when we woke up. No new snow had fallen overnight but the sun wasn’t out either. As we drove into the park we stopped for some mountain shots.

This time as we drove the loop we stopped at Firehole Falls and after I took some photos I offered to take photos for other folks who wanted the obligatory family photo in front of the waterfalls. One of the more amusing photos I took was of a very large (14 people) Hispanic family. Language barriers and my trying to direct them on where to stand, etc. had everyone laughing.

Having remarked the day before that there didn’t seem to be a lot of Bison in the park, Alan ate his words on this day. Bison were visible everywhere. After a while I stopped taking pictures of them. As we made our way to Grand Prismatic Springs the sun came out, it was a very welcome site. We walked the boardwalk at the springs, but the weather was so cold that most of what we saw was steam coming off the boiling waters of the springs, so we missed out on some of the more spectacular color features. Always up for something different, we drove a side road that most folks ignored and saw Firehole Spring. It wasn’t very big, but it was very, very deep. From the springs we drove to Kepler Cascades and hiked the short distance to take a few photos. Out in the parking lot, when we were returning to our truck, I stopped and chatted with some young men who had just returned from a very long hike. They had a soft top over the bed of their truck that allowed them to camp inside the bed.

Because the weather was poor, we decided to drive south into Grand Tetons National Park. The mountains there are indeed grand.

We took the Jenny Lake Drive then went up 191, stopping to take photos of Moltens barn.

And we took another odd road at Schwabacher’s Landing and got some beautiful shots from there before heading back down to check into our hotel in Jackson. The weather this day was rotten – rain and snow with low clouds were ever present, so we decided to stay in, catch up on things and do some laundry.

Drove up to Cooke City the long way to avoid some road closings in Yosemite. We drove west through Lamar Valley to get to our hotel and saw loads of Bison and some elk, but no wolves as we had hoped. Wednesday evening we kept an eye on the weather reports and when they said that 10-20″ of snow was to be expected within the next 24 hours, we decided to cut our visit short and leave just ahead of the storm.

It snowed overnight and was snowing pretty good when we left. When I was checking us out I saw bear tracks in snow at the hotel!

We decided to take a chance and we drove east through Lamar Valley looking for wolves, again with no luck. Saw some Bison but not as much as on Wednesday. We drove to Billings for the night.