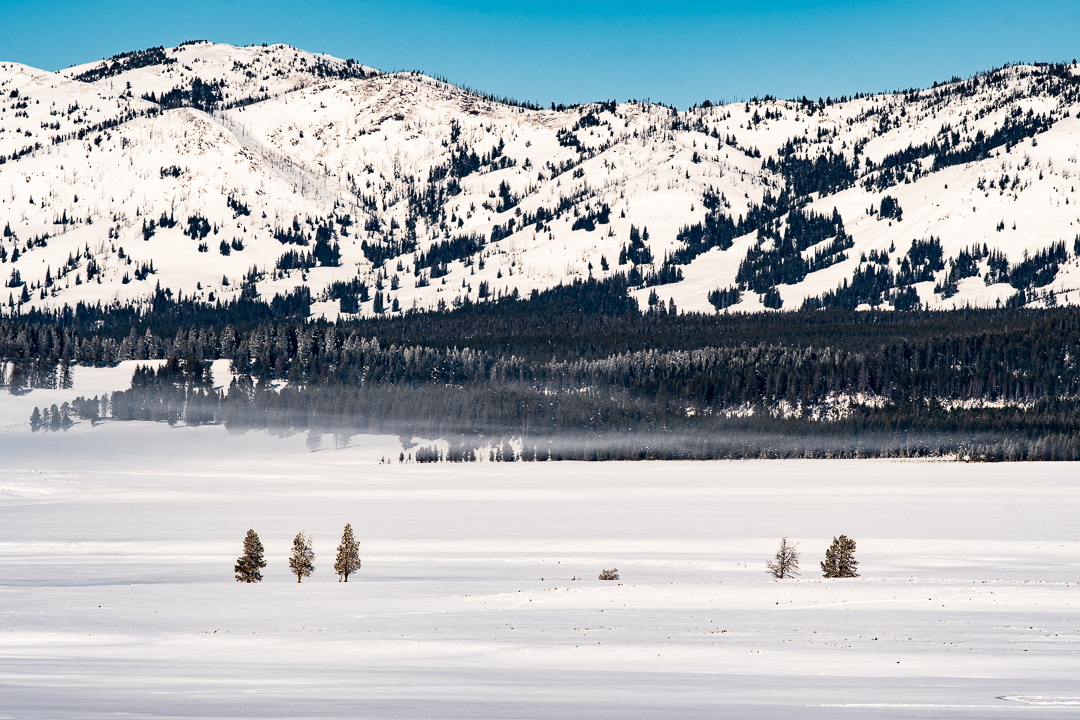 We got a good start to this trip, landing in Bozeman, MT by 1:00 PM. The airport is small but cozy; styled very much like a log cabin lodge.

After a bit of confusion, we boarded the Karst Stage ride to West Yellowstone, stopping by Big Sky to drop off a couple of passengers. The rest of us were headed to the Brandin’ Iron Inn.

When we arrived we got our room and settled in. As part of the NANPA Tour, we’d been instructed to meet in the Breakfast Room at 6:00 PM.

The meeting helped to introduce our tour leaders, get a better idea about where we would be shooting each day. We also introduced ourselves, then we were assigned a Yellowstone Vacations Snowcoach and a leader for our first day. We were to go with a different leader each day. For our first day we had Trent Sizemore, the youngest of the leaders. When we were all asked what we’d like to see and shoot at the Park, we all answered, “Wolves!” Never a good sign when that’s what everyone had as their number-one item.

Because of the government shutdown during this time, it was unknown whether we would have to pay an entrance fee (i.e.; would someone be manning the gate). But we all had National Park passes, so it was no problem on the one day that someone was at the gate.

We had breakfast at 6:30, and the Snowcoaches left the hotel a little after 7:15. Once past the gates to Yellowstone, we drove on the snow-covered roads along the Madison River looking for wildlife.

The first thing we saw was a Sun Dog; a rainbow rising up with the steam along the river. Further up the road we encountered our first Bison. On the road. We stopped, got out and took pictures while we waited for them to move along. A “herd” of snowmobilers came along in the opposite direction and very carefully navigated around and past the Bison.

A few members of wildlife that became a recurring sight were Trumpeter Swans and assorted ducks. The swans were beautiful birds, but sometimes difficult to photograph well, given that we were, most of the time, above the bank of the river where they swam.

Just before we left the river area, Alan spotted a Coyote on the other side of the river. Everyone piled out and started snapping away. He was a beautiful fellow, and even posed nicely for us up on a log before disappearing into the woods.

We visited Fountain Paint Pots and we also went to Firehole Falls, me without a polarizer. There wasn’t much to photograph of the Pots themselves, but the snowy landscape was pretty. Firehole Falls, was pretty, but I just couldn’t get the shot I wanted without my polarizer.

We were originally told that this was going to be our longest, hardest day, but to be honest, it never felt that way.

Today we rode with Mark Gocke and a different set of folks than the day before. Mark was much quieter than Trent, which we found a bit disappointing. We started this day much like the day before, going along the Madison River, but without sighting much more than swans and ducks. From there we rode to Gibbons Falls, trying to beat the sun before it crested the mountains behind the falls.

The next place we visited was a view of the Grand Canyon of Yellowstone Upper Falls. They were not very visible because they were mostly frozen over, and the steam from the remaining cascades obliterated a clear view.

As we were headed through Hayden Valley to go to a better viewing point for the Upper Falls, we saw another Snowcoach and photographers along the road. They’d spotted a Red Fox way up on the ridge. We stopped, and shot photos for a while, then the fox walked over the ridge to the other side. The other coach packed up and left, while we waited. Sure enough, the fox came back over the ridge and continued its course, then to our delight, she came down the slope and toward us! She got incredibly close before deciding she would cross the road a bit further south.

We finally saw the Upper Falls up close, and I got a decent shot – but again – without the polarizer. I did the best I could.

On the way out of the park we rode along the river again, and spotted a Coyote with a pretty bad wound on its leg. There were swans and some ducks in the river that the Coyote was interested in, but I think he realized that they were going to be too hard of a quarry. We all felt quite sorry for it, until we got to watch it hunt down a mouse(?) and have it for dinner under a tree. It was here where an Elk cow was spotted along the high bank. Alan got a nice picture of her while I stayed on the Coyote.

Today we rode with the tour leader, Michael Frances. He’s the one who organized the trip, and who knows Yellowstone better than anyone else. He was a fount of knowledge and good humor.

Once again we drove along the Madison River, this time concentrating on landscape photos – much to Alan’s dismay. We did get a nice view of the sun kissing the peaks of mountains though.

We stopped in the Midway Geyser Basin area at a location where we’d stopped before with what they called “knee high” trees; trees that had the bark boiled away by the sulfurous waters. This time there was a wonderful mist all around us, creating some fascinating and eerie landscapes. The sun was low and intense when the mist moved behind us and we got more interesting shots.

We went to a number of other places, including the Grand Prismatic Spring, Biscuit Basin, and Old Faithful, which we watch erupt spectacularly. Then we went to the Black Sand Basin. All of these afforded us some landscape shooting – but for me, I just couldn’t seem to get the shot. I was sorely disappointed with myself.

Then the fun started. Bison were near the road! Most of the Bison we’d seen so far were so far away that they weren’t worth shooting. But now we had them up close and moving across the river. It was an exciting shoot to say the least.

When we finished with the Bison it was late, so we headed out of the park. As we were riding we came upon some other photographers taking pictures of a Coyote walking far out in the field. We got out as this was our last opportunity for wildlife and we got a real show! He seemed oblivious to us as we paralleled him, us on the road, him in the field. Then he stopped, cocked his head and stood motionless. Michael, who was next to me at that moment, said, “Oh, he’s hunting. You’re going to love this.”, and sure enough, the Coyote suddenly sprung into the air, and dove into the snow, head first. He came up empty, but didn’t disappoint as he repeated this behavior two or three more times. I used the speed setting on my camera and got some amazing series of him hunting like this. What a great way to wind up this adventure!