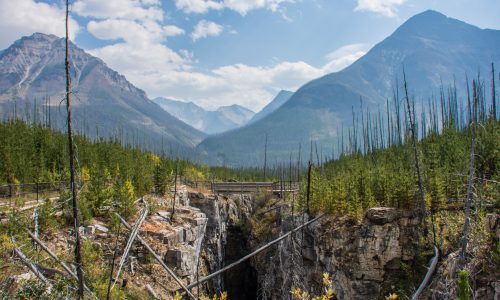 With no morning shoot planned, we slept in until a bit past seven, then got up and left Banff to drive to Yoho National Park and, unplanned, hiked Emerald Lake Trail to a waterfall which wasn’t there. Poo.

From there we drove on to Kootenay National Park and did another unplanned hike on Marble Canyon trail. Beautiful, awesome and stunning. Wow. After this hike we drove on to Radium Hot Springs and our new campsite. Along the way a Big Horn Sheep crossed the road in front of us, and we saw another one lolling about on the side of the road. Once we got to our campsite we heard, then saw some turkeys. We drove around a bit looking for a place to eat breakfast and saw some more Big Horn Sheep. After breakfast we drove through Glacier National Park on our way to Revelstoke Campground for the next few nights. On the way we stopped and hiked a short trail; Giant Cedar Boardwalk trail. It was so pretty, lush and green. Afterward we stopped at the trail head for the Skunk Cabbage trail and had a picnic lunch. Camping just outside Revelstoke National Park. The smoke from the BC fires is bad. So bad that there really aren’t any good photo ops available. Despite this, early in the morning we drove up to Meadows in the Sky Parkway in hopes of catching a bus to the summit area. According the the park’s website the buses started at 8:00AM. Unfortunately they had changed the schedule and were now running at 10:00AM instead. So we drove up to the parking lot anyway and found a little trail and walked that. After that we went back to camp where we worked on odd ‘n’ ends and utilized the campground’s wifi for some computer work.