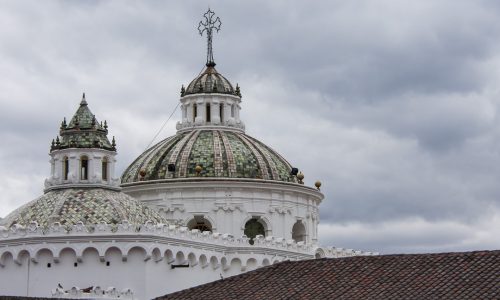 TUESDAY
We arrive in Ecuador at 3:00am and breeze through customs, meeting our tour guide, Henry and his trainee Carla.

We are told by Henry that Quito is under a Yellow Alert because of the activity of Volcano Cotopaxi. Good to knoW.

We went on a tour of Quito Old Town, the original center of Quito. It looks like I imagine much of Europe looks like. The streets are narrow and usually just one-way. The traffic control police are all women and usually very pretty. We saw the San Francisco Monestary, Legislative Palace (where their President lives), Independence Plaza, and the Jesuit’s La Compania Church. What we found interesting were the row of shops just beneath the Legislative Palace, with a barber shop being the oldest shop there. Security at the Palace is so low compared to the USA White House.

We had a tasty Ecuadorian lunch at Tianguez Restaurant just out in front of La Compania Church.

After lunch we piled into the bus and rode out to the Equatorial Monument where we learned about how the Equator was measured and set. We took pictures of us straddling the Equator. We have now stood on the Equator on both continents (Africa and South America) where it can be done. We got our passports stamped there too. Once we back on the bus, Henry awarded us all with certificates.

From here we visited the workshop and museum of Oswaldo Guayasamin, Ecuador’s mist famous artist. He is known best for his cubism and depictions of man not necessarily at his best with his “Age of Anger” series, and more. Although I am not a fan of cubism, I was quite struck by his art and what he was trying to portray in it.

On the way back to the hotel we learned that the USA’S choice for a monument in Quito (for the Embassy) was Abraham Lincoln – and then we saw his statue.

Once back at the hotel we were on our own for dinner. The first thing we did was walk to the Supermaxi store (large grocery) and pick up a few essentials. Then we walked to a restaurant that Henry had recommended, La Choza, with authentic Ecuadorian cuisine. It was very tasty.

I have caught one of our fellow passenger’s colds. Damn.

THURSDAY
Bathrooms in Ecuador vary from your ability to flush the toilet paper to requests that you do not.

Roads in Quito are an improvement over those in Cusco and Lima but they are still rough. They are significantly steep because of how the town is built. Think, San Francisco on steroids. I am sure that auto repair shops make a boatload of money on brakes and transmission repairs.

We took the bus out this morning south onto the Pan American Highway. Henry tells us that one of the volcanoes erupted this morning but is was minor. He tells us about how the highway was built and that it is the “spine” of Ecuador – it is the most important road in the country.

We stopped at a bakery in Cayambe where we watched the making of Bizcochos, a flaky tasty bread eaten as a midday snack. Henry purchased a few bag-fulls for us to try. I liked them but Alan did not, they are too fry for his taste.

From here we traveled to Otavalo Market,  a large market where we played a game of Henry’s devising; he gave each of us a name of a product in Spanish and a few token phrases to ask for the product and then how much it cost and purchase the smallest amount we could. Our product was ayahoashca – a root that when boiled down for 48 hours into a super-thick bitter tasting tea, acts as a super strong hallucinagenic and makes you very sick. It can even kill you!

From this market we walked to the Huarmi Maqui, another large market that sold mostly textiles. It is a huge space with loads of merchants trying to get you to buy their wares. I picked up a hand-embroidered table runner and a knapsack.

A pretty local lady named Mercedes joined us on our bus as we traveled to our lunch location. She sang some traditional songs and gave us each gifts of bottle holders.

We were taken to lunch in a sweet woman’s home in the next town. It was a simple meal of beans and roasted corn as an appetizer, soup, and then a perfect plate of chicken, boiled small yellow potatoes, abas beans, avacado, and peas. We also enjoyed a little bit of fresh pineapple for dessert and a cup of herbal tea.

While we enjoyed our tea the woman told us about different healing techniques using Henry as a translator and for demonstrations.

For dinner Alan and I went to a deli in the hotel. The bread for our sandwiches was very fresh.

Once up in our room we noticed that the volcano was totally clear of clouds so we dashed down to the lobby and asked the concierge if we might have permission to go to the roof to take photos. He got the bellman to take us up. The bellman even let us get up on the helipad! I didn’t go all the way up because my cold was making me a little dizzy, but I still got some nice shots.

Back in the room we worked on splitting up the luggage so that we would only have one suitcase to take to the Galapagos with us. The other bag will be stowed at the hotel.