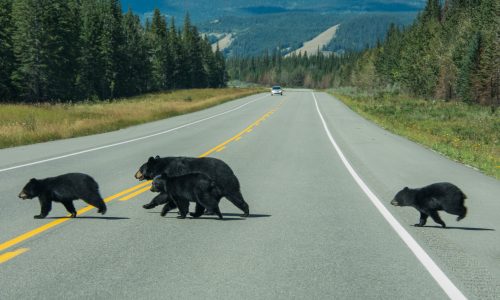 Sunday morning we broke camp. I didn’t get but two hours sleep but I felt okay, just pissed off at one of the camps nearby for carrying on until 1:30 in the morning. And the frequent trains blasting their horns throughout the night didn’t help much either. Ah well. Camping life. Off to Jasper, Alberta for three nights.

We arrived in Jasper in the afternoon and were welcomed into the park by a black bear and her three cubs crossing the road in front of us. We then checked out downtown, had lunch, and checked in for our campsite. Once we were set up we drove up to get tram tickets for Wednesday morning. Showers were our next priority. Cleaned up we made ourselves comfortable at camp and had Hamburger Helper for dinner. That was not the best decision – we paid for it later. The good news was that our campground area was blessedly quiet and both Alan and I got a great night’s sleep.

Monday morning we slept in (7:00 AM – oh my!), had a nice breakfast and then headed out for some hiking and picture-taking.

The first place we checked out was Athabaska Falls. These falls were awesome in strength and beauty. The sunlight hit the fall’s mist just right and gave us a small rainbow. We hiked a very short distance here, but it was a good way to stretch the legs out. Next we joined up with a few other drivers and stopped to look at (and photograph) a mother Mountain Goat with two kids. They were quite close to the road, but didn’t seem to mind all the paparazzi. Mother mountain goat with two kids. The kid at the back was more adventuresome than the kid next to mama.

Sunwapta Falls were the next hike. These were nearly as strong and pretty as Athabaska Falls. Here too, we hiked a little bit before going back to the car and heading off to the next destination. For lunch we stopped at a roadside pull-off and had PBJs. The view was stunning. Not a bad place to picnic off the tailgate of the truck. We decided to skip the Glacier Skywalk and instead hiked to the toe of Athabaska Glacier. Killer. It felt like it was straight uphill. It was a very steep grade, over about a half-mile distance to get to the top and then there was a quarter-mile loop that took us close to the toe of the glacier. Most folks don’t understand how big these glaciers are – you simply have to see it for yourself to know. The walk down was, of course, easier, and we got in the truck and headed down toward Banff. We stopped at another pull-off that sported some bridal veil falls. I took some pictures and then we headed back to camp. Dinner was simple, Ramen noodles with a can of mixed veggies poured in and a side of fruit cups.

Our first stop of the day was at Medicine lake. It was a sad sight; mostly burned out from a 2015 fire, there were few really “pretty” shots to be had, but I took this one at the best angle I could. Along the way to Maligne Lake we saw a cow moose, and her calf was hiding in the woods. I finally got my wish on animals to see. When we got to Maligne Lake, we started out on this nice little path. We ended up hiking Mary Schaffer Loop trail and along the way we struck up a conversation with a young couple from the Netherlands. Later we caught up with them again as they watched a Spruce Grouse peck around near the trail. After a loo break we decided to take the boat ride out to Spirit Island on Maligne Lake. This is a much photographed spot and I’d really wanted to see it. So glad we went. Despite the tourism, it was an almost magical place. On the drive back home I made Alan pull the truck over so I could ID an animal carcass on the road. It was a pine martin. We’d hoped to see a live one in the wild, but it just wasn’t meant to be.

Later in the evening we drove back out on Maligne Lake road. This time we saw a moose (cow) twice. As we headed back to camp we stopped for some stunning sunset photos that looked like a watercolor painting. Having purchased our tickets early on, we headed out on the Jasper Skytram at 8:30AM to Whistlers Summit Trailhead. O.M.G. I made it to the false summit!! Hardest hike ever! But the view from the top was unbelievable. On the way up we saw a Pika, and on the way down we saw a Marmot. Cool beans. The elevation at the Lower  lift station was 4,265 feet. The upper station, where we started our hike, was at 7,546 feet. The summit at Whistlers Mountain exceeded 8,202 feet. The False Summit is just 30 feet lower.

The smoke and ash were worst yet today, so visibility was terrible – we could barely make out the town below, and last night the moon was the color of a ripe peach. This morning the sun looked like a basketball hanging in the sky.