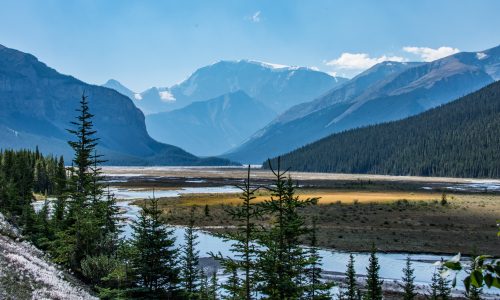 Thursday morning we got up and had breakfast then packed up the tent and were on our way.  A black bear crossed the road in front of us shortly after we started out from our campsite – what a great good-bye gift from the park.  We drove from Waterton Lakes to Gooseberry Campground.  However, our first stop was at Vulcan.  How could we not?  We stopped at the visitor center, which is shaped as a flying saucer, and visited a city park which has a bust and hand imprints of Leonard Nemoy. We then drove to Drumheller to see the hoodoos.  We were driving in prairie lands and then the landscape changed radically when we hit Drumheller.  The actual hoodoos were a bit of a letdown but the landscape was something else. After climbing around the hoodoos area we drove into Calgary to get some camera batteries, that took two attempts as the first store, in a huge mall, didn’t have any in stock. The second store had plenty and I purchased two.  After we arrived at Gooseberry Campground we discovered we’d made reservations at the wrong campground – five hours away to the east. Not what we were needing. Since it was already 6:00 PM we just took a campsite with electricity but no water anywhere and drop toilets only.  I called and cancelled the reservations at the other campsite and made a reservation for the following night at a Holiday Inn.

Got an early start on Friday morning and headed to Banff.  Decided to scope out sites I had picked for photos.  Went to Vermilion Lakes and got pictures of a loon and landscapes. From there to Two Jack Lake and then to Bow Lake and had lunch there by the lake. We drove the Iceways Parkway, and Peyte Lake was  too crowded to stop.  We went to Waterfowl Lakes. Then headed to Red Deer and a hotel room for the evening.

Got up Saturday morning after a great nights sleep and a good hot shower and headed to Elk Island National Park. Stopped for lunch at McDonald’s and to used their generous WiFi for awhile. We then checked in at Elk Island and got some Aardi selfies with a bison skull. We drove the Bison Loop Road and saw a small herd. I got out of the truck and walked across the field a little way to take some pictures, with Alan cautioning me about getting too close the whole time.

Afterward we hiked the Living Waters Boardwalk. The boardwalk has seen better days but it was still a nice hike. We saw ducks and loons. A pair of black ducks – I thought it was so funny that they both struck the same pose when I put my camera up to my eye.

From here we drove out to Star Gazer Campground and set up camp. I wasn’t feeling well so I lay down for a little while.  For dinner we had cheese sandwiches then drove back out into the park to hike Beaver Pond Loop Trail. By then I was feeling better. As we were driving to the trail head, we came upon a bison standing partway in the road. He seemed to be deciding whether or not to cross. We slowed down and passed him carefully before continuing on our way, signalling another driver that there was something up ahead of them as they approached.

Once we got started on the trail I decided since it was so late I would pushed it in the beginning; we had 2 miles to go before it got dark. It was a nice trail, and toward the end we could slow down and we saw muskrats, a beaver, ducks and a solitary swan preening and cleaning for the evening. I kept my camera aimed at him and waited for him to do just this… This Trumpeter Swan was all by itself. He preened and cleaned and gave me a show.

We got back to camp after dark and went to bed exhausted. Some time in the night we heard coyotes in the distance and later, when I couldn’t sleep, I heard one or two a bit closer to camp.