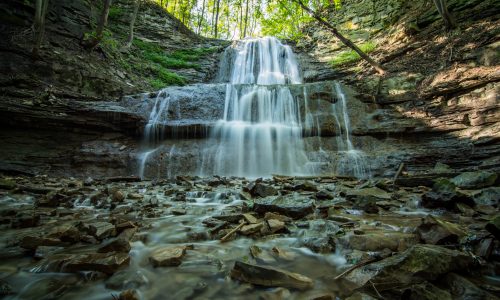 We drove west into Ontario and tried to see a few of the waterfalls near Burlington, which is known as the waterfall capital of Canada, but the parking lots were all jammed full in the afternoon. Disappointed, we checked into our hotel and went out to eat dinner at Gus & Guido’s, an eclectic mix of Greek and Italian foods. Our reviews on the place were mixed. Service was good, but the food could gave been better. Early, early in the morning we drove to Burlington and on to Sherman Falls for photos. The falls were set well back in the woods along a fairy easy hiking path. Arriving early was a good idea as the falls were beautiful in the early morning light. Best of all there was barely anybody there.

I took lots of pictures and struck up a conversation with a gentleman who recommended we try Tiffany Falls just down the road. Parking was at a premium by the time we reached Tiffany Falls, but we found a spot anyway. After a short hike, when we arrived at the falls, we found a few people and another photographer there already. The photographer there had a model he was shooting with the falls as a backdrop. I pulled out my gear and prepared to wait for him to finish. As I waited more people began to arrive. Soon a small crowd was stepping around the falls and getting in the other photographer’s way. He and his model gave it up and packed up to leave. While he packed up I offered to take photos of families with their phones. Finally I positioned my camera and tripod for the shot I wanted but people just kept stepping in front of me for selfies and family photos. It was all so crazy rude. Patience finally persevered though and I got my shots.

Afterward we stopped for lunch at Kelsey’s Original Roadhouse; a big ol’ burger for Alan and nachos for me.

Since we had time to kill, we took in a movie and saw Atomic Blonde at the nearby Cineplex.

That evening we sorted through clothes and camping gear and reorganized our stuff.

On Monday we got up early and headed to Point Pelee National Park, a park set up on the tiny point of land on Lake Erie. We hiked the Shuster Trail down near the visitor center, then hiked the Marshtrail. There we saw Barn Swallows feeding their chicks, Paint Turtles, a Green Frog and a Leopard Frog, and an unidentified marsh bird. The entire trail is a boardwalk, half of it floating. Pretty cool.

Lunch was at Paula’a Fish Place just outside of the park. They made a great potato soup!

Once back in town we did laundry at a nearby laundromat and had smoked meat sandwiches at Angel’s Diner for dinner.

Tuesday we headed north, driving  to a campground I had contacted by phone. We drove up and we left before even getting out if the car. The place looked like a bad gypsy camp. Run down RVs, tent sites with 3 and 4 medium sized tents, even some rusty old mobile homes.

We stopped for lunch at Harvey’s, Canada’s second largest fast food chain, and made another phone call. Brownlee Lake Campground had a spot for us.

When we arrived, after driving down enough backroads that I swore I heard banjoes playing, we were rewarded with a nice little campground and RV Park on a lake. What a NICE place this was! Clean, remote, and wonderfully quiet. We heard the loons on the lake as we lay on our cots that night.

The next morning we got a good start and headed up around the tip of Michigan to camp at Pukaskwa National Park. We were able to secured a spot at the back of the  campgrounds at Hattie Cove. Toilets were close by, and the sites were separated by stands of trees and brush – a nice place. We heard loons again as we took a walk near the water before retiring for the night.

Thursday morning it started raining at 5:30am and as of 1:10pm it hadn’t let up. Gratefully most of it has was a light rain.

We stayed on the cots most of the morning, napping a bit, having breakfast when we got hungry, and making the occasional trip to the restrooms. It was good down time. Around 11:00 the rain got down to a light drizzle and we headed out to hike Bimose Kinoomagewnan Trail around Hattie Cove Lake. The trail started off nicely – thin trails surrounded by trees and understory, our pants legs brushing the plants as we walked. Then the trail went up a flight of stairs, then along a granite face, then it got harder.

More than half of BK Trail is granite. Moss and lichen spotted along the granite make the trail a little slipperier. Rain makes it even more slick in places. At one point, for the sake of my camera, I had to crawl on hands and knees to get over a particularly steep face. I finally put the camera in Alan’s pack, and after that the going got easier, for me at least. God bless Alan.

Many of the granite parts of the trails fell away 50 to 100 feet. It was challenging to my (mild) fear of heights, but we did it and did not fall once. Alan amazed me, he was like a goat up on the granite. I’ve learned I need to take my hiking poles with me next time.

BK is a two mile trail but all that granite made it feel more like four miles. By the time we got back to camp we were soaked and hungry. PBJs never tasted so good!

The rain never really stopped. It got down to a drizzle, and it intensified to a pleasant rain, but it did not stop for 24 hours. At 5:30am I was awake and noted that it had stopped. I woke Alan and we quickly broke camp with a wet rain fly and damp tent and were on our way.

Having found no space on the ferries to the island, we had to abandon plans to visit Isle Royale National Park, so we drove to Kakabeka Falls Provincial Park and set up camp instead. Once camp was set up we drove to Thunder Bay to hit Walmart up for some supplies. As we sat in the truck that Alan had just parked we observed  an elderly woman who seemed to be searching for her car. I got out and asked her if she needed any help and she gratefully accepted. Alan hunted the parking lot while I kept steering the 87 year-old out harm’s way – she kept pushing her shopping cart in search of her car. Finally I persuaded her to let me hit the car alarm on her key fob and the car lit up just two aisles over. I stopped the alarm and saw her to her car while Alan made his way back to us. I was loath to let her drive home, but she insisted she was okay and thanked us.

In the evening we drove to Kakabeka Falls for photos and some walking around on the boardwalk that sits on either side of the falls. Afterward I made dinner with a little friend nearby, a ground squirrel who sat about three feet away munching on his own dinner. The falls are huge: the second largest in Ontario, and they made for some pretty nice shots.

Saturday morning we rose early to get to the Falls before sunrise and made it just in time. I spent about an hour taking long-shutter-speed pictures of various points on the Falls, and a few of the entire subject too. The photos turned out dark and moody because of the lack of strong sunlight. I think they look pretty good but could use a little bit more post-processing. Once back at camp we changed into hiking shoes and struck out on Poplar Trail, an almost three mile moderate hike through stands of Poplar, Beech and Aspen trees. Since I have a thing for white-barked trees this was a very happy hike for me. Along the way we saw Red Squirrel, Snowshoe Hare and a Red Cockaded Woodpecker.

For lunch we went to McDonald’s in Thunder Bay to plan the next few weeks of camping. We were there at least three-and-a-half hours working with the wifi that McD’s so generously supplies. We also had lunch, in part to pay our dues – free or not, we felt obliged to “pay” for the wifi we had.

As we headed back to camp the weather loomed threatening, the expected rain was earlier than anticipated. With a lot of good fortune we arrived back at camp in time to pull the rain fly over the tent and keep our cots dry.

I fixed dinner between sporadic showers – canned chili – and we enjoyed it in our tent.