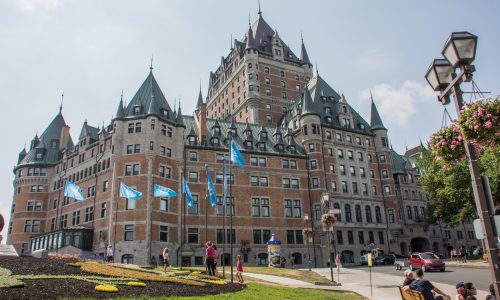 With reluctance, we left PEI. We drove to Kouchibougauc National Park in New Brunswick where we hiked the Claire Fontaine Trail, a trail which was not very well established, but did provide us with views of a Gray Jay, American Three Toed Woodpecker and a pretty Yellow Warbler. The water was pretty too. Along the trail we met a French speaking family with little kids whom I showed some photos on my camera. Their mom told them the bird names in English and in French.

On to our next campground at Sugarloaf Provincial Park. There we got a cabin for the night. It was nice not having to set up the tent, but as usual, the bathrooms were far away.

The next morning we headed toward Tadoussac, but stopped short of crossing on the ferry to camp at Camping dus Fjord.

For dinner we dropped in at a little mom and pop place. It was crazy busy with only one cook and one waitress working the whole joint. We felt bad for the waitress, who, despite having to serve the whole place herself, maintained a courteous and kind air about her. When we left, somehow I forgot my sunglasses.

The next morning we packed up, deciding not to stay the additional night as the Camping dus Fjord facilities were less than optimal. This was our first negative experience with the language barrier in Quebec.

Once away from the camp we went up the river for a whale watch. It was at this point I had realized that my sunglasses were missing. Fortunately I had a backup pair in the truck.

The whale watch boat was huge. And VERY crowded. We did our best to get photos of the Beluga and Minke whales we were privileged to see on the St. Lawrence River. We were disappointed with the trip, but happy that we saw what we did. Afterward we took a chance and stopped by the mom and pop place. The waitress remembered me (Alan had been generous with his tipping the night before) and retrieved my sunglasses from the back of the bar. Merci!

That night we stayed at a Comfort Inn just outside of Quebec City and had dinner at Mike’s, Alan had a huge messy sub and I had a salad.

The next morning we stopped at Eggselante for a really good breakfast, then drove in to Old City Quebec. Old City in Quebec City is reminiscent of old European cities. The flavor is distinctly French, but I noted some English village undertones too.

Alan and I hiked up a long steep hill and a long steep road to get to the Notre Dame Basilica where we got to see inside of the old church. I was tempted to light some prayer candles, but simply sat and thought of loved ones who had passed on instead.

We walked around the city and took pictures, most notibly of the Les Promenades Fantômes Hotel at the Apex of the city. the place is huge! I also tipped a gentleman playing his guitar on the street then, with his permission, took a picture. The walk back to the parking lot was much easier than the walk up. Alan, with his excellent driving skills, got us back on the road and on our way to Montreal.

We checked into our hotel and rested a bit before heading into the city in the evening.

Construction made driving there horrible.Three wrong turns had us nonplussed.  Alan finally got us to a parking lot that I was so very fearful of because I didn’t think the truck would fit inside – but it did. I have no idea how many floors we drove down before we could finally park.

The first thing we saw was the Palais dus Congres. What a fascinating building. The colors on the glass panels were spectacular, and sometimes they light them up at night.

As we were trying to get to the Lipstick Trees, we found that there was an Anime convention going on, and that is what kept me from being able to take a decent shot of the “trees”, but it was fun to see all the people dressed up.

We walked up into town and saw the outside of Notre Dame here – unfortunately they were closed until the next morning.

We finished up the night with a simple sandwich dinner outdoors at Presse Café and talked about how we had determined that we are NOT city folk.

Friday we drove back into the states and visited Ben & Jerry’s in Vermont. We bought some souvenirs, had a hotdog, went on the tour, and I discovered my new favorite ice cream flavor; Milk & Cookies. Yum! Alan was in heaven.

After all that fun we drove to the border of NY and Canada and stayed the night. Having dinner at the hotel. Because it was not on the menu, I asked for a grilled cheese and got a loaded one! Delicious.

I called and arranged for a campsite for the following Tuesday night just east of Sault St Marie – we have discovered it is easier planning things several days in advance.