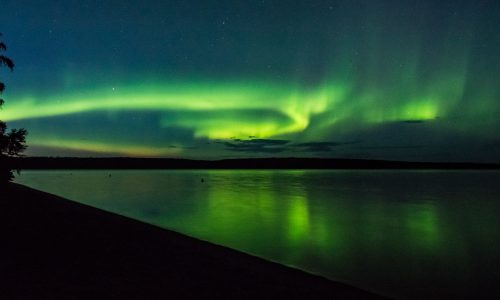 Wednesday, August 16th we decamped and drove all day to Prince Albert National Park. Along the way the oil change reminder light came on, so we stopped at a Great Canadian Oil Change station. Those guys do it right! They have two bays, each with a pit underneath. There is no lift for the vehicles. You drive your vehicle right over the Bay and stay in your car/truck while one person in the bay changes your oil, and another, above the bay checks your filters and refills the washer fluid, then finally takes your payment. Very efficient.

Once at Prince Albert we set up camp and had dinner.

Since our research had determined that there were significant dark skies in spots at this park, we took a chance and drove out to Paint on Beach on Lake Waskesiu. Along the way we saw a Red Fox hunting for its dinner along the side of the dirt road. When we arrived at the beach it was still too early to see the Milky Way so we sat in the truck to wait. Unfortunately for us clouds started rolling in and we gave up and headed back. On the way back we saw two Red Fox.

We got back to camp at 11:00 and went right to bed. After midnight we were awakened by a bad storm; rain, lightening and thunder surrounded us for a long time before fading away. An hour later we had a repeat performance.

In the evening, since weather was threatening, we visited the town, I posted some mail, and we dined at a funky little cafe.

Not to be detered, we again drove out to Paignton Beach in hopes of a clear night to photograph the Milky Way, and with a lot of luck, maybe see something of the Northern Lights.

Once again we saw a fox. This time we stopped to watch him hunt. It was at times comical as he jumped straight up and the then went head first toward his quarry.

It was getting pretty dark as we approached Paignton Beach. I looked out through a break in the trees and I saw a strange oval whitish cloud in the sky. But all the other clouds were black, backlit by the remaining glow of the sun. I knew it must be the Aurora Borealis. We parked the car and I told Alan to hurry and get out, then pointed out the strange cloud, which by now had spread out a bit. He wasn’t sure at first if it was the Northern Lights, but then as we watched, it changed. It continued to change as we stood there and began to have an ever so faint greenish glow, the quite suddenly the show was on. Thoughts of the Milky Way were cast aside as I geared up and started shooting this amazing display in the skies. For close to two hours we had the beach all to ourselves, taking photos and just watching the light dance, reflecting off the lake, and change before our very eyes before it began to fade away. As a bonus, during this sky dance, we heard loons calling their lonely song. This was truly one of our most memorable events. Friday we stopped at McDonald’s to work on the aurora photos and upload the images to Facebook, then we dropped in at a Walmart to pick up another large thumb drive for backups.

The drive to Grasslands National Park was long, at one point we came up to a construction stop light. After waiting for 15 minutes, I got out of the truck and walked up to see how long we would have to wait. Ten minutes later we were on our way again.

We checked in at Grasslands’ visitor center and made our way out to the Frenchman’s River campground. Along the way we spotted a small herd of Pronghorn Antelope in a farmer’s field. A little further along we saw a Ring Neck Pheasant and some Sharp Tail Grouse. Just before entering the park grounds we saw a lone male Pronghorn. Since it was evening, we stopped near a butte for some pictures of the landscape and Black Tail Prairie Dogs. While taking pictures of the Prairie Dogs we saw two coyotes passing by, and I accidentally caught a Burrowing Owl in one of my photos. A little farther on we saw bison, about four or five. After helping Alan to set up the tent I hiked up a hill to get some shots of the sunset. When I was done with that I joined other campers at a campfire with park staff – the only fire allowed since the fire danger level was high.

One of the women had a drum she was drying and once done, asked if she could sing a native song, she was from many tribes but was full blooded First People. Her song, in her native language, was beautiful. She told us it was a “welcome” song and described how and why it was sung long ago.

Later in my cot I thought about this place and how it made me feel more connected to the earth. Around 6:00am the wind started. Not just a nice breeze but 24mph with long 37mph gusts. Our tent couldn’t take it. After much debate we collapsed the tent, put two storage bins on top and went for a drive hoping the wind would die down as the day wore on. It didn’t. We were told it would be like this until 10:00 at night at the earliest. Concerned about our tent, we made the decision to decamp and drove down across the U.S. border and got a hotel for a night. Prairie winds are nothing to mess with in a tent.