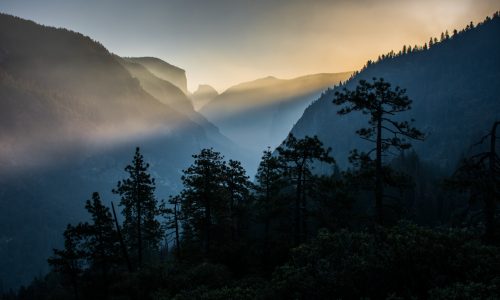 We spent a good portion of the day driving to Yosemite National Park. Our goal was to get a campsite IN the park. From what we could ascertain on the Web, Hodgson Meadows campground was a first-come-first-serve site that was not full. Yet.

We found our way to the campground and the registration kiosk in good time and we managed to find and secure a site. We set up the tent and then hopped in the truck to run down to the Valley for a quick look.

On the way there we spotted some beautiful dogwoods in full fall color and I made a plan to drive to that spot and take pictures the next day.

Yosemite has a few active fires and the smoke was very present throughout the Valley. I was sorely disappointed as this would change several shoots I’d hope to do.

I cooked some Knorr Minestrone soup for dinner while Alan put sandwiches together. The temperature had started to drop and I knew we were in for a cold night. With no electricity we were going to be pretty darn cold.

Zipping my sleeping bag all the way up helps to retain body heat, that and putting my blanket over the top of the sleeping bag helped to keep me warm enough. Those late night trips to the restroom didn’t help though.

The overnight temperature got down below 38°.

What a COLD night! And to think we were going to have a repeat of it on this night. Brrrrr!

We left camp around 6:00am and headed to Tunnel View. I wanted to get some pre-sunrise photos and in this instance the smoke in the Valley added a great ambiance. I stood out there for about an hour with various other photographers, camera on the tripod and intervolometer set up. I liked what I was getting. From there we drove up to Glacier Point where the temps dropped more than 10 degrees. I took some photos of the smoke below, and of Half Dome before we headed back down to the Valley and the Visitor Center. Yosemite is still working on its roads. A year after we were here last they are still at it. They have made headway but I wonder if they will ever be done.

We got a good parking space and walked into the Village, bought some t-shirts, a patch and two stickers, then walked on over to the Ansel Adams Gallery where I spend some time admiring my favorite photographer’s work. I picked up his biography and a book of John Muir’s musings. We stopped at the cafe and got some lunch before heading back out.

At camp Alan took a long nap while I finished a book. Bored, I grabbed my beads and stuff and made four bracelets. By the time I finished it was 4:30 and time to head out to take pictures of the dogwoods.

The colors were so unique and they contrasted nicely with the yellows and greens of the forest. It was hard to take a bad picture. We put some gas in the truck and picked up some sandwiches for dinner which we ate in the truck since it was warmer than the tent. Once back at camp we got things as packed up as we could and retired for the night.