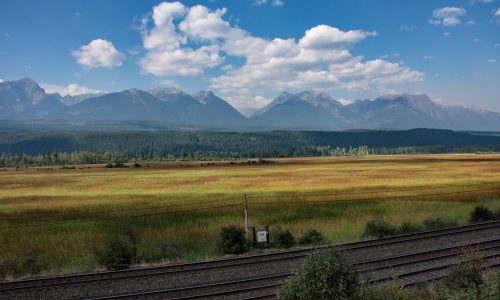 A long day’s driving to reach eastern British Columbia. Nothing much to report.

After checking out Alice Lake, we spent time at McDonald’s first thing in the morning to sort out what we wanted to do while here. First order of business was to visit some waterfalls.

We visited and hiked Brandywine Falls, a very pretty straight down waterfall. The hike was very short and the view was very nice. Next up was Alexander Falls which was easily viewed from the parking lot. We had a nice picnic lunch and then drove on to try and get to Rainbow Falls but could not get to it – the roads were blocked off. We did see a young black bear on our way down from the falls, but it scampered away before I could take a picture.

Later we visited the Squamish Lil’wat Cultural Centre, to learn more about the aboriginal people of the area. They had a short film which we watched too. Since we were so far north of our campsite, we decided to go on to Nairn Falls. Here we hiked a trail cut into the side of a steep canyon along the river. The falls were impressive, but the photos didn’t turn out too well. Wednesday was something of a down day. We drove into Vancouver and hiked to the overlook at Siwash Rock, then stopped in the city at a camera store to look for a graduated neutral density filter. When we returned to the camp site we worked on reorganizing our gear. Not having camped like this before, we determined there were things we could have left behind.

On this morning we visited Shannon Falls. It was a short hike to the base and an overlook. Shannon Falls is the third tallest waterfalls in British Columbia.

Having come up empty the day before on finding the filter I wanted, I made some phone calls and finally found a store who had it in Vancouver. We made another one hour trip to the city and picked it up.

The stress of city driving made us hungry so we stopped at Jethro’s Good Grub for a bite. I ordered poutine as a last meal in Canada.

From Jethro’s we drove to a different location and walked the seaside trail to the base of Siwash Rock. The aboriginal lore surrounding this formation is interesting, and I took some time to honor it.

Alan was bushed by the time we got back to camp so he headed for the tent and a nap while I broke out the camera gear and other items and commenced to some serious cleaning and maintenance. By the time I was done and reading a book he woke up and we had dinner.

That evening, having had all sorts of reports on the Aurora being predicted at a level eight for our area, we drove north to try and get away from the smoke-filled air and see what we could see. Unfortunately it was a bust as rain clouds had converged on the area too and blocked our view of the skies.