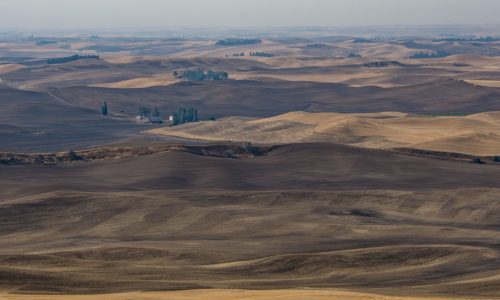 Friday morning we were up bright and early, hit Tim Horton’s one last time for donuts and McDonald’s for breakfast (I have developed a “thing” for their veggie-feta wrap), then drove on down to cross the border for the last time into the USA.

We met my cousin Hank and his wife Pat, two lovely people with whom I love the pass the time, at a grocery store not too far from Anacortes, Washington. Lunch was decided upon and we hit the road.

We fell in behind Hank, Pat and their Model A car, which Hank has lovingly restored over the past many years, and drove to one of their favorite restaurants down along a farm road. As we approached the crossroads just before the restaurant two vehicles collided just in front of Hank. I watched it all happen in slow motion and could not believe Hank managed to miss all of it. He stopped on the far side of the accident and we stopped just before it. We all jumped out to render assistance as best we could. Police and EMS were on the scene very quickly. I provided an EMS technician with a rundown of the symptoms of both of the people in the one vehicle (they weren’t hurt too terribly bad, but she was complaining of chest pains and he might have had a broken wrist), while Hank talked to police and updated them on the gentleman from the other vehicle. Once we did that we walked on over to the restaurant and had lunch. We had a lot to talk about after we talked at length about the accident. I just love spending time with those two.

I took over the driving and got us to our hotel for the night. I called my brother and let him know we were in, and we set up a time to visit him and his wife the next day. I also texted our friend, Stacey and she and I set up where and when to meet for lunch the next day.

Saturday we stopped by Billy Frank Jr. Nisqually National Wildlife Refuge to get a new annual National Parks pass, then we met up with an old friend and her family. Stacey, Aiden, and their son, Alden. It was a terrific afternoon with lunch at a nice Mexican restaurant. We stayed a few hours after finishing our meal to play catch-up, and Stacey gave us some very addictive chocolate, chocolate chip cookies.

After our good-byes we headed on over to my brother’s to visit with him and his wife, Honey. Bob and I talked shop (cameras, photography) while Alan and Honey talked travel and animals. Bob and Honey love small creatures and make their backyard home to squirrels, rabbits, chipmunks and birds of all kinds. The squirrels are cheeky little buggers and come to the back door begging for peanuts. Dinner was tasty pizza, then more chatter. I hated to leave, but knowing we’d see them again the next day made it easier.

Laundry was first order of the day, then a visit to Walmart to load up on a few supplies, then a grocery store for a few more items before heading over to my brother’s again.

This day we did it again – talked shop, travel, animals/wildlife, movies, and whatever else came to mind. Dinner was at Red Robins and then back for more good conversation. I miss them already.

Monday we drove to Palouse State Park. Located in the eastern area of the state of Washington, it boasts a canyon with a strong waterfall. It certainly was pretty. I wanted to hike lower into the canyon to get a better angle on the shots, but my knee had been voicing its complaints, so I thought better of it. The upshot was that Alan spotted and photographed a Yellow Bellied Marmot. After visiting the Palouse we headed to our campground located at a KOA along the Snake River. Next to the camp was… train tracks. Yup, we had trains roll along during the night. Thankfully they were few and far between.

Tuesday morning, after a nice breakfast, we headed back over to the Palouse to see if the morning light made a big difference in the view. It did, but not for the better. We got back in the truck and headed for Steptoe Butte State Park.

Along the way I asked Alan to stop now and again for a quick shot. The rolling hills are marvelous to see, and the change in plowing patterns and colors made them fascinating. Have I mentioned I am fascinated by repeating patterns? Once in a while you’ll see it in my photos. Steptoe Butte is a very high “hill” that is too short to classify as a mountain, and it stands out in the middle of these rolling hills like a sentinel. Three or four times taller than the tallest hill surrounding it, one can reach the top via car in a single lane corkscrew going round and round the butte. The view from half-way up and all the way up is breathtaking. I could not get over the beauty of this place. I began to understand what Nick Page sees in it. After a LOT of photos, we headed back to camp – and I took some more – this time with the giant wind machines in the background. Those behemoths always stun me with their size.