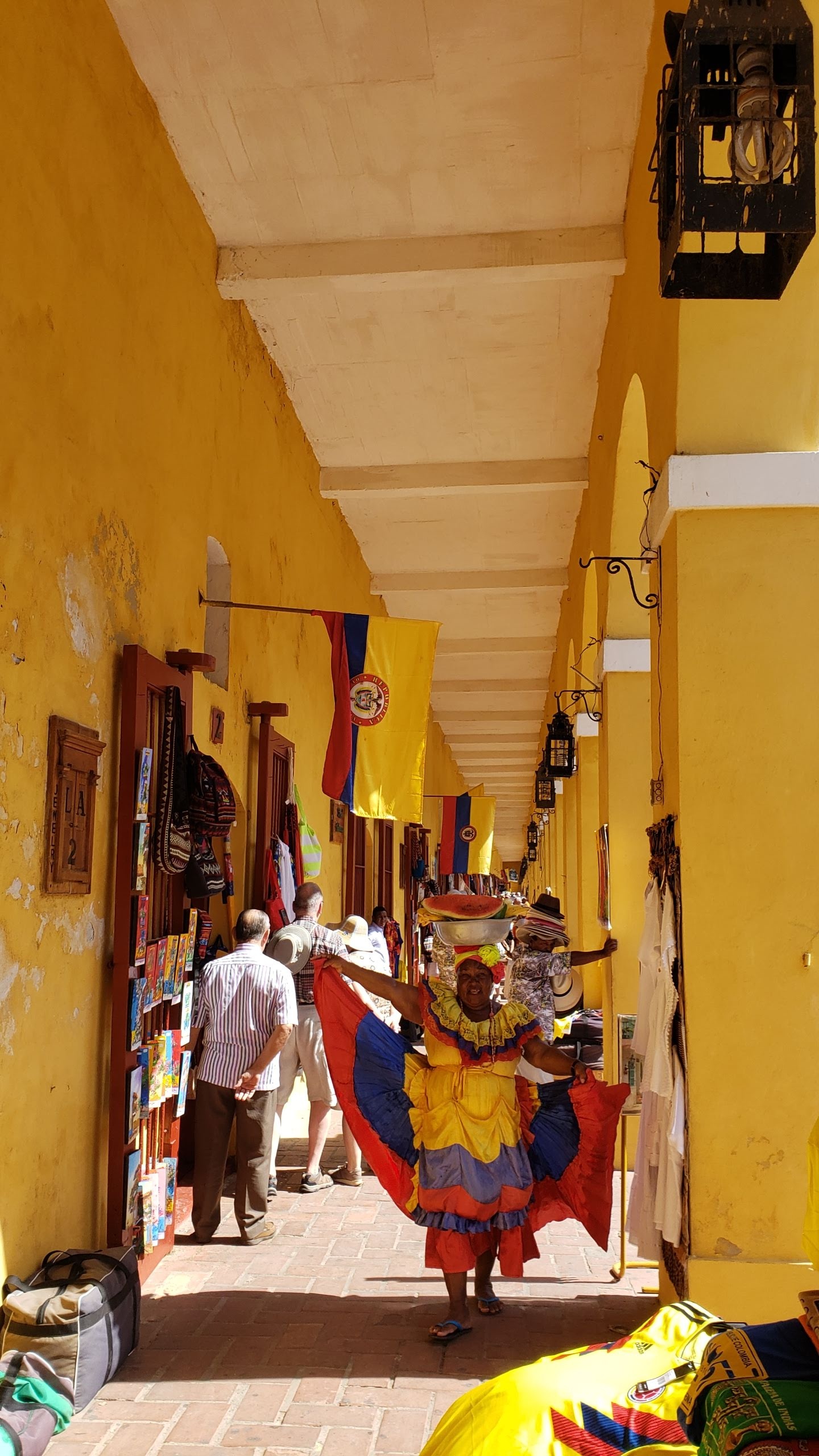 We have made it to Columbia! We had a quick bite to eat and then headed to the meeting point where we were assigned group numbers and then herded onto buses. Our bus driver was Carlos and our tour guide was Fernando.

The first stop, after a 25 minute ride out of the city, was at La Boquilla Village where we would take a canoe ride through mangroves tunnels. We were taken four to a boat with an oarsmen at the back – he actually used a long wooden pole to push the boat along – the waters were no more than thigh deep. Did I mention we had to wear life vests? Along the way we learned that there are three types of Mangrove trees; black, red, and white. We also got a cool demonstration of a fisherman casting a net for small fish, not to eat but for bait to catch crabs. He also showed us a crab trap with crabs in it.

Nature was plentiful enough; we saw peacocks, brown pelicans, snowy egrets, great-tailed grackles, laughing gulls, great egret, reddish egret, mangrove crab, black vulture, grey kingbird, magnificent frigate bird, black necked stilt, green ibis, tricolor heron, and lots of small jumping fish. Just so you know, I will be listing all of the variety of animals we see on our trip – this helps me identify them later when I go thru my photos – but it’s also a hobby of ours.

When we got out of the canoes, we were given a coconut shell with coconut water and something that tasted faintly of coffee. After this we boarded the bus to Cartagena (pronounce CART-tuh-hay-nah).

Cartagena is the 5th largest city in Columbia by population. Cartagena Port, Fortresses and Group of Monuments has been designated an UNESCO World Heritage Site. The old walled city and fortress were designated in 1984. There were originally 5 islands, but the area was filled in and there is now just one.

We saw the fortress (Castillo de San Felipe de Borajas) from the bus as we rode into the city. The historic center of the city, Old Town, was protected by 11 km of surrounding wall, as well as the fortress to dissuade pirates from attacking.

We visited the Las Bovedas (The Vault). This was the former dungeon where prisoners were kept during the Spanish Inquisition. It is now used for vendors to hawk their wares.

Plaza de Bolivar, formerly known as the Plaza de la Inquisicion, was next. In the center is a statue of Simon Bolivar, it is the centerpiece of a small park. Bolivar was the military leader that lead Columbia to its independence from Spain.

A short walk further and we were in Custom Square. This is where the custom and taxes had to be paid for incoming slaves. At one time in the history of the slave trade there were so many slaves being brought in that the only way they could keep track of how many a merchant had was to brand each slave. Fernando told us that people from outside the city walls could smell the burned flesh. It’s a very sad part of Cartagena’s history.

A short walk away and we came to San Pedro Claver Square, where the Saint, Peter Claver, is buried and the church that bears his name stands. We saw the 3 main types of houses, low (1 story), middle (2 story) and high (3 story). We also learned that buildings have a very large double-door and then a more normal sized door cut out in the larger door for the servants and slaves to use. The large door was so the owners could leave on horse back or chariot and did not need to touch the ground where the slaves walked.  We noted that the streets are quite narrow and were told that they were designed this way to allow for shading from the hot sun.

After arriving back at port, we made our way through a short maze of last minute shops (typical for cruise lines), and then to our delight we also passed through a small zoo. What a neat way to end our visit!

We got back in time for lunch then just chilled, watching football mainly, until dinner.

At dinner, I had wild mushroom soup, orange sorbet, gnocchi with asparagus, and New York cheesecake with macerated strawberry. I also tried a thimble of the ship’s own homemade limoncello. Alan had baked potato soup, orange sorbet, seared scallops, and chocolate mousse on brownie.

After watching Green Bay beat Seattle, we went to see Arthur Trace, a magician, perform. He did a lot of intriguing card tricks.

What a fantastic, long day of exploring and learning. Time for bed.