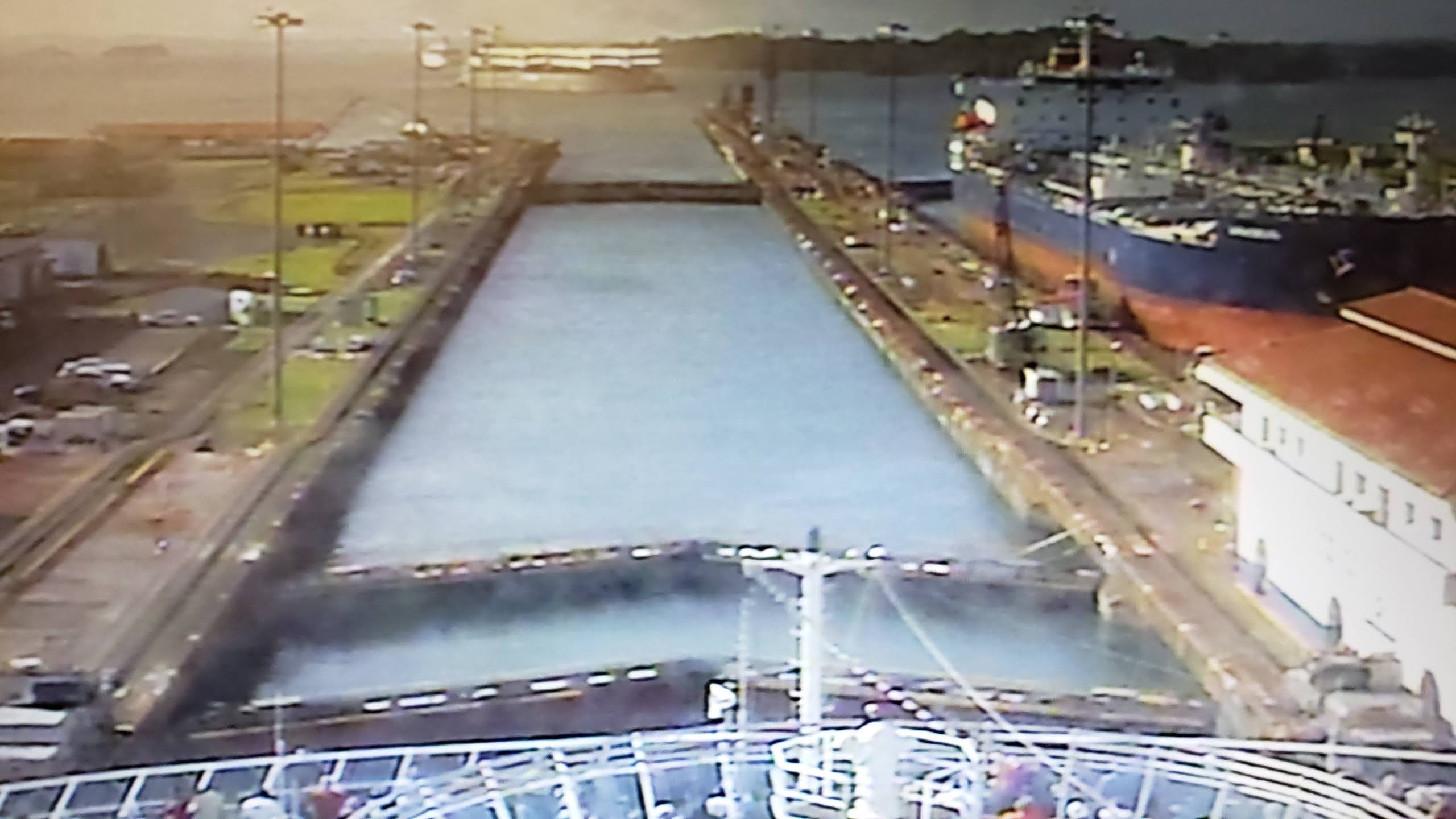 Today is the Panama Canal Transit day. Alan got to the gym early so he could work out and get to the front of the boat before we hit the first locks. He used the ship’s TV to keep track of where we were. I joined him soon after to watch and get some pictures.

There was a smaller cruise boat navigating the locks in front of our ship, so that made for good pictures as we watched that boat rise up while ours stayed low. We went to the sides of the ship and saw that there wasn’t more than about 2 feet leeway on either side of the canal while going through the locks.

The Panama Canal is a 51-mile artificial waterway to connect the Atlantic and Pacific oceans; completed in 1914. It takes about 8 hours to complete the transit. The first three locks lift the ships up 85 ft to Gatun Lake. The ship is guided thru the locks using “mules” (not the animal they were named after but electronic locomotives). While cruising on the lake, we passed a sister ship, the Emerald Princess, going in the opposite direction. We took pictures of the Centennial bridge as we passed under it. At the other end of the canal are the Pedro Miguel Locks (1 lock, 31 feet) and the Miraflores Locks (2 locks, 54 feet). Lastly, we passed under the Bridge of Americas on our way into the Pacific.

Once the ship was halfway through the locks and we’d gotten some pictures, I decided to hit the gym. Afterward we both went to play trivia and Alan and I got 18 out of 20 questions, good enough for second place, not bad for a team of 2. We returned to our stateroom and sat on the balcony and watched Panama go by, not too tough a view to take in. Later on, we went to another trivia event but we only got 9 out of 20, the winners had 17. We laughed at our incompetence.

At dinner, I had prosciutto and melon for the appetizer, and chicken stuffed with spinach and cheese for the entree. Alan had seafood antipasto for the appetizer and shrimp and scallops for the entree. We both had Tiramisu for dessert. After dinner we saw a comedy show with a very funny man, Steve Morris, and we bought two of his DVDs and I had Alan take my picture with him. Late in the evening we attended another trivia game, Movie Madness. We scored 16 while the winners had 19. We are finding that people who attend these trivia events are very competitive.

The first order of the day was to turn back our clocks one hour, once that was done we walked the decks for exercise then I went to the knitters group, and Alan went to general trivia, getting 17 points – the winners had 20.

We had noticed some sea birds soaring around near the front of the ship; Alan went out and took pictures of them and identified them as brown boobies (it’s a bird, get your mind out of the gutter). I joined him later just for some fun. At dinner we both had fruit kabobs as an appetizer. I had frog legs and Alan had Veal Cordon Bleu for the entrée. Dessert was hazelnut pudding with fudge sauce. We went to a variety show later in the evening featuring instrumentalist David Klinkenberg (only one of four violinists to be featured on PBS), and magician Arthur Trace.