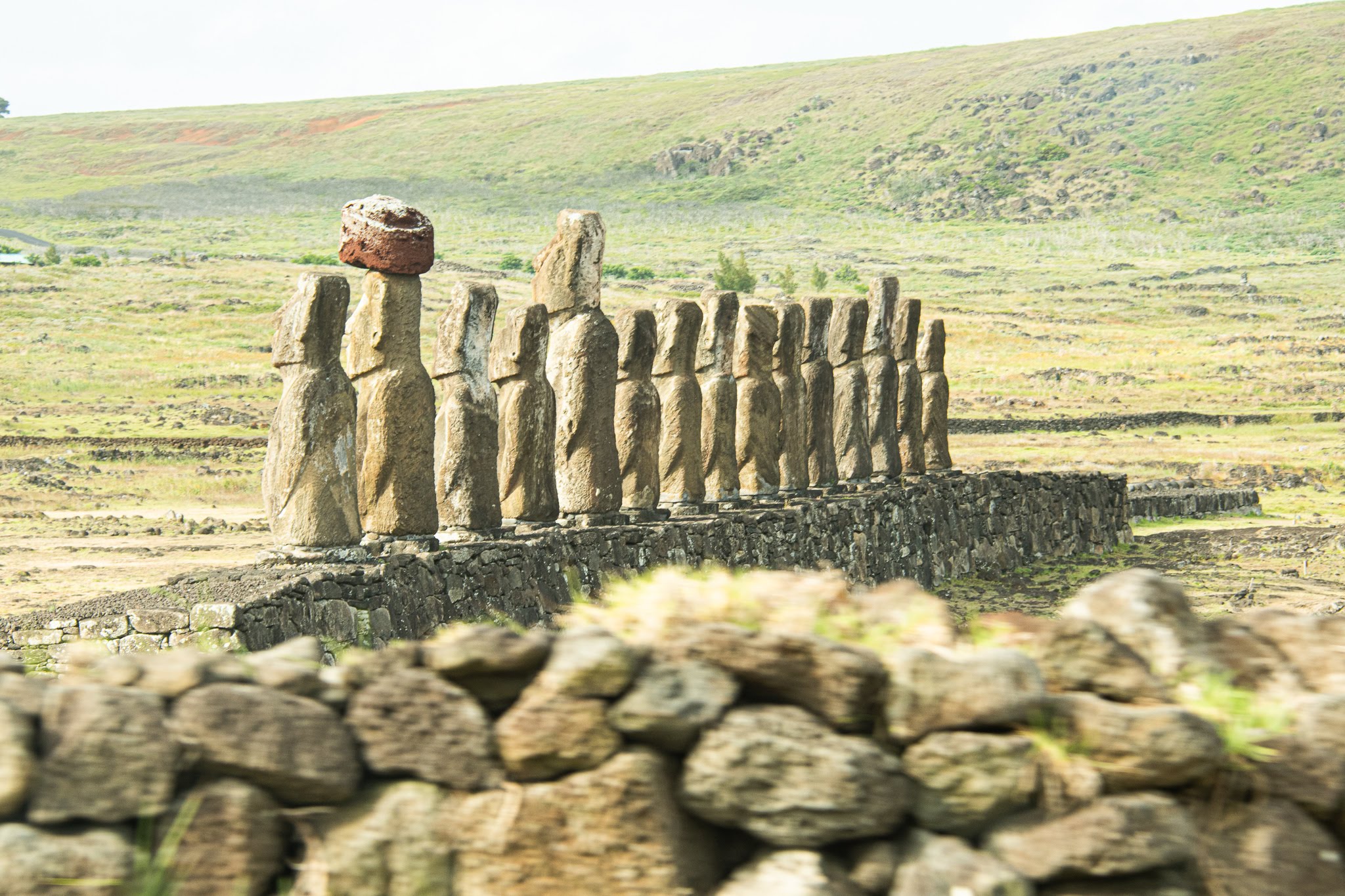 We were up at about 7:30 AM. There was a general buzz in the ship about visiting Easter Island. From where we were anchored, about a mile offshore, we got our first glimpse of some of the famous moai. These were the Ahu Tahai complex, more on them later. Although it was exciting to see our first moai, the distance and the fact that they had their backs to us, took away just a little, but they were moai, how great was that? Our excursion wasn’t until 2:00 so we had plenty of time to kill this morning.

We were told that the ship could not put any of their tenders (i.e. water shuttles) into the water before they got clearance from the island. This clearance could not begin until sunup around 7:30 and would take about an hour. Clearance took longer than expected and the waters were a little rougher than hoped for, so the tenders took less people than capacity on each trip to shore.

This caused delays for all the trips to the island. Since we had time to kill, we went to the morning trivia. We didn’t win. We had some lunch. I was not planning on having any because of the rough seas, but reconsidered after reading that it was best to eat a little to help with motion sickness.

We were to meet for the “Ahu Tahai & Rano Raraku” tour at around 1:20. We did this but then had to sit around and wait for another 2 hours before we could get on the tenders to go to the island and start our tour. Since the first group got off to a late start, delayed by about an hour, and the fact that the seas were rougher than hoped and the tenders were not being filled to capacity, everything was being pushed back.

Since we were sitting there for a tour and they were calling other people to go ashore the crowd was getting more than restless. Finally, after a two hour wait, we got called for our tender ride to shore. There were 4 tenders running but only one tender was allowed into the Easter Island harbor at a time. This was the reason it took 40 minutes to get from ship to shore.

The first stop on the tour was the Rano Raraku crater. This is the spot from which most of the island’s 900 moai were quarried. Rano Raraku is a UNESCO World Heritage Site. There are over 390 statues lying or half buried on the slopes of this extinct volcano. The moai were created 400-600 years ago using this volcanic rock. Erosion has covered many of the stone moai but experts believe that their bodies extend 20-40 feet underground. The average height of a moai is 13 feet, however in the crater there is a moai “El Gigante” which measures over 71 feet in height. Most of the moai on the island had been knocked over during tribal conflicts but were restored with the help of archeologist William Mulloy in the 1960s.

Next we visited Ahu Tongariki. At this location, there are 15 moai sitting on an Ahu close to the shoreline near. An Ahu is a stone altar. This is the largest Ahu on the island, and probably the most famous.

Lastly we visited the Ahu Tahai. It is a small moai complex just outside of the capital city Hanga Roa. The five statues standing here are very different from each other in scale and shape. These were the moai that we could see from our ship. The Ko Te Riku is also found here. The Ko Te Riku has black and white eyes and a red topknot called a pukeko on its head.

About 2.5 hours after our original end time we headed back to the tenders. Once we were on the tender it took less than 15 minutes to get back to the ship.  This was a good thing since everyone had to be off the island by sundown.

Had to set the clocks forward an hour. We got up early and went to the gym. We also went to the front desk to hand over our flight information out of Chile so they can set up the departure at Santiago.

The next three days were spent at sea, playing trivia, going to the gym, and having nice dinners. The ship docked for a night at La Serena, Chile, then left for Santiago (San Antonio) where we boarded a plane for home.

Fortunately, I got to spend nearly a month with my mother, moving in the day after we arrived home, before she passed away from the cancer. I miss her terribly.