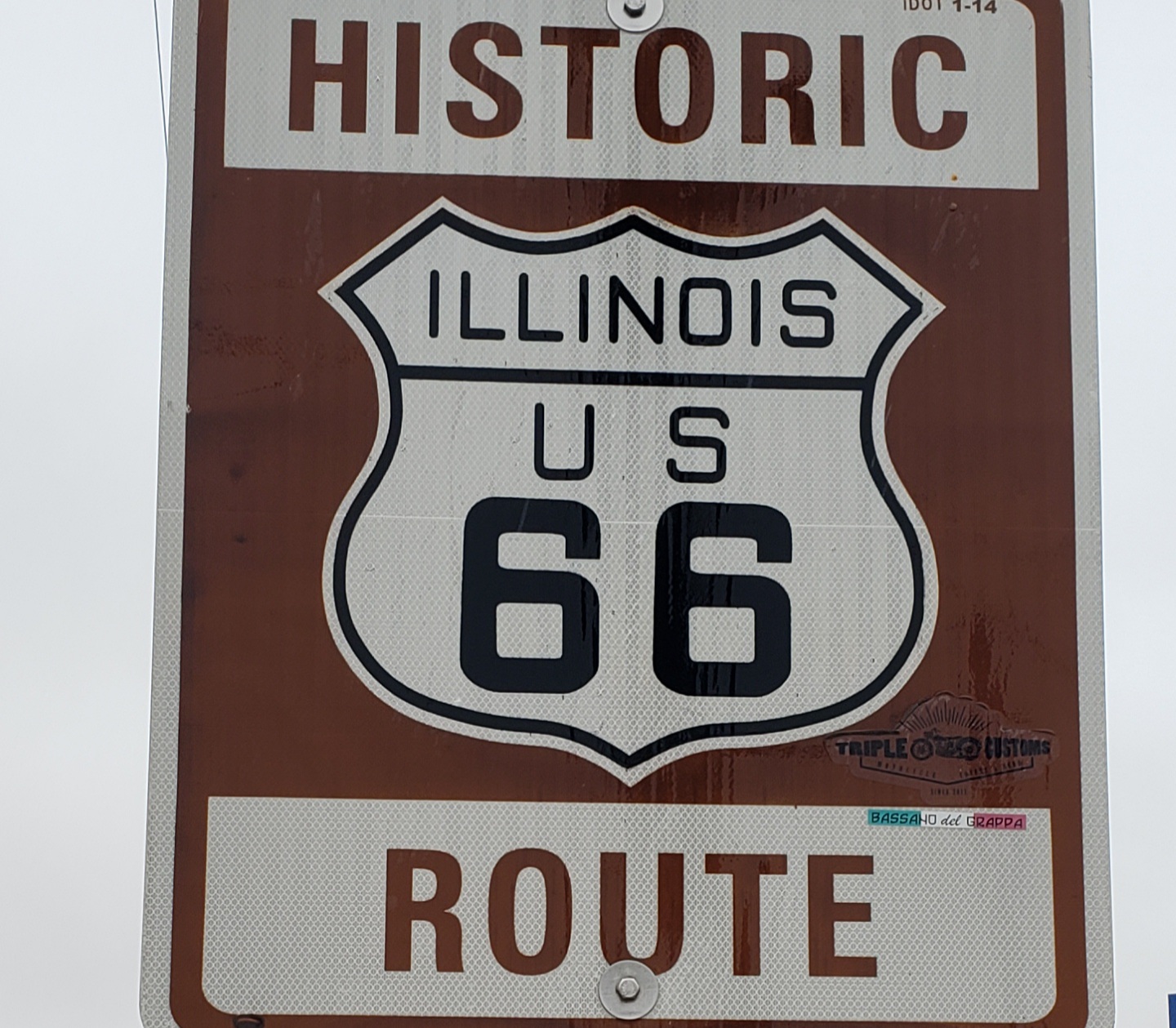 We got up early and got off to a good start at 8:45am. The drive was uneventful and we arrived at Scioto State Park in Ohio, our halfway point to reaching the start of our trip, at around 5:00 PM. There was nobody to check us in, and while they had several pit toilets, there were no shower facilities or flushing toilets, which was expected. Once we had leveled off and set up with electric we went for a walk around the beautiful little lake right next to the camping area. The fall foliage was just getting past peak, but it was still beautiful reflected in the lake. We watched as some young girls across the lake bother a group of Canada geese. On our side if the lake we were sitting on a bench just minding our own business and throwing little pieces of twigs into the water. This attracted the geese, so they swam over to us begging for food, which of course, we didn’t supply. Along with the geese was a cute little pie-billed grebe. It seemed quite lonely and liked to hang out with the geese. After our walk we went back to our campsite and I warmed up dinner; grilled chicken and baked potatoes. We tried out the new bug lantern that my cousin Wendy had recommended to us and it seemed to do a good job. As is our custom when camping, we retired early. Alan worked on a puzzle book and I worked on a crochet project. Tiring of those occupations, we played a couple of rounds of Backgammon – Alan won both. After some reading time we turned out the lights.

We got out from under our quilts at 7:00am, got dressed, had a simple breakfast, broke camp and headed to the nearest gas station since we were very low on gas. Gas prices were at $2.19/gal, so we just got 3 gallons then headed for a Sam’s Club gas station further along our route where we filled up for 30 cents less per gallon. We also stopped at a Walmart for a couple of items. On the drive toward Chicago we pulled over at a rest stop and had a picnic lunch.

To be safe, we ate out in the parking lot, then headed back to the Casino for the night.

We slept with the doors open and screens up last night and had a good night’s sleep. We did sponge baths when got up, dumped trash, then gassed up at another Sam’s Club before heading to Midewin Tall Grass Prairie Preserve to the south.

As we left Joliet behind us it started to lightly sprinkle. By the time we’d picked up a trail map at the preserve and gotten to a trailhead, it had turned into a downpour, so we had to scrub the hike.

The Gemini Giant in Wilmington was the next stop, then we saw a very cool old restaurant, the Polka-Dot Drive-in in Braidwood. This had statues of Betty Boop, Elvis, James Dean, Marilyn Monroe, Superman, and Elwood & Jake From the Blues Brothers movie.

We made a quick pit stop and got some donuts. While paying I told the clerk we didn’t need a bag. She said, “Are you sure, something maybe for trash?”. Alan replied, “No, she doesn’t need a bag to put me in.”

Back on the road we drove into Dwight and got photos of the old Amber’s Gas Station – they even had a retro camper parked next to the building. I would have gotten a photo of the Old 66 Family Restaurant, but it’s been refurbished and doesn’t look like the old funky style from the past.

The town of Odell had another vintage gas station.

In Pontiac there were wall murals painted by the Walldogs, a group of artists that go out to different towns each year and, with the town’s permission, paint murals unique to that town. We walked around town in the drizzling rain and took pictures of a bunch of them (there are 19 total in the town).

One of the more unique items on display in an alleyway was an old school bus called the Bob Waldmire Land Yacht. Waldmire outfitted the bus to suit his needs and eclectic style and used it to travel the Route for much of the rest of his life in his old time “RV”.

Then we visited the Route 66 Association Hall of Fame. The museum is on 3 floors of a building on the main street and has nostalgic items from The Mother Road, such as an old VW Bus, an entire floor set up to pay homage to the 1940’s, photos, knick-knacks, license plates & more.

The Selz Royal Blue Shoes mural in Chenoa was to be our next destination, but after a lot of searching we could not find it. From photos I found on Google, we believe that it no longer exists. The town government put up a building in front if the wall where the mural had sat for more than 60 years, and they painted the whole wall and over the mural an ugly brown color.

When we got up this morningbit was 67° outside. A cold front from Canada has blown in and it is now down to 43°, and it’s only noon.

We stopped in Bloomington for a take-out pizza at Lucca’s Italian restaurant downtown. We are trying very hard to not eat IN at restaurants since they are indoors and most folks inside are not wearing masks. It’s just safer in this era of Covid.

We were going to stop by Funks Grove Pure Maple Sirup (that’s spelled correctly), but they had a sign up that they were SOLD OUT!, so on we went to the Dixey Truckers Home, a.k.a. a truck stop and restaurant. We decided we’d eaten too soon before, so we just used the facilities and left.

In Atlanta we stopped for a photo of a Paul Bunyan statue (holding a hotdog no less), and bonus, I got a picture of a nice wall mural and Alan pointed out a funky bench using the tailgate of an old Ford pickup as the back.

In Lincoln we stopped for a picture of the world’s largest railsplitter covered wagon. It has Honest Abe at the helm. For fun I also took a picture with our RV in it, with Honest Alan in the driver’s seat; a juxtaposition of 2 modes of transport.

Springfield, Illinois was our last town for the day. Here we saw a giant buck made entirely out of old salvaged car bumpers. This fantastic statue is standing just a block from city hall.

Leaving the statue we drove outside of town and checked in at a KOA, which, it turns out, has showers we can use in the morning!

For our final meal of the day we dined at the Cozy Dog Drive-in. This is another of Route 66’s iconic landmarks, boasting the “original” corndog. I have to admit, they were pretty tasty.

On the way into Springfield we drove through a massive flock of starlings sitting alongside the road. As we approached they flew up as one large wave and moved about like a dark dancing cloud. Amazing.

It was 37° out when we got up this morning. I turned the heat up, then switched it from electric to propane heat, just in case Alan decided to unplug the van. After about a minute I noticed an error warning on the control panel, and it was starting to get noticeably colder inside. We did some troubleshooting we discovered that the propane was sealed off. This is done during fill-up, which was done when we had the RV in the shop recently. Once the switch was flipped we were able to heat the van using only propane, which is good since we will be boondocking tonight.

The showers at the Springfield KOA were good, and it didn’t hurt that nobody else used them while we were in there. Ahhh, a hot shower! The park itself was clean and sits out in farming country, so it was blessedly quiet.

We decided to drive back into Springfield for breakfast and to top off the gas tank at a Sam’s Club. We had breakfast at Charlie Parker’s Diner, another place featured on DDD. The food was plentiful and good. We watched one of the waitresses carry a huge pizza tin to the table next to us, and wondered who would order a pizza at this hour? We were surprised to see that instead of a pizza the tin held the largest pancake we’ve ever seen!! Social distancing was achieved by separating the tables and booths with sheets of plastic. Shower curtains anyone?

On the way to the diner we got a little turned around and wound up in a parking lot that had a life-size pink elephant holding a huge martini glass, with an olive in it. Picture time!

After filling up we headed south to see the Sugar Creek Covered Bridge. It was a pretty setting and a perfect morning for pictures so I took my time and took quite a few. We met a nice woman with a giant white dog (Samoyed?) named Sully. We got some petting in then she went on her way.

Next up was Art’s Motel, but the picture-worthiness of it was gone, so on we drove toward Litchfield.

After looking in the Route 66 book we purchased before taking this trip, I noted the Skyview Drive-In Theater was just a few blocks before our next scheduled stop. We pulled in and i jumped out to take and took photos of the giant screen, the parking area and old concession building, and the sign out front. It all made me nostalgic.

The Ariston Cafe was our destination for lunch. Open face roast beef sandwich with gravy and mashed potatoes. Comfort food at its best. The Cafe is known to be one of the oldest family-owned restaurants along the Mother Road.

Henry’s Rabbit Ranch was quick stop for pictures. The “ranch” is, so named because of all the old VW Rabbits sitting out on display.

Further down the road we got pictures of Weezy’s Restaurant.