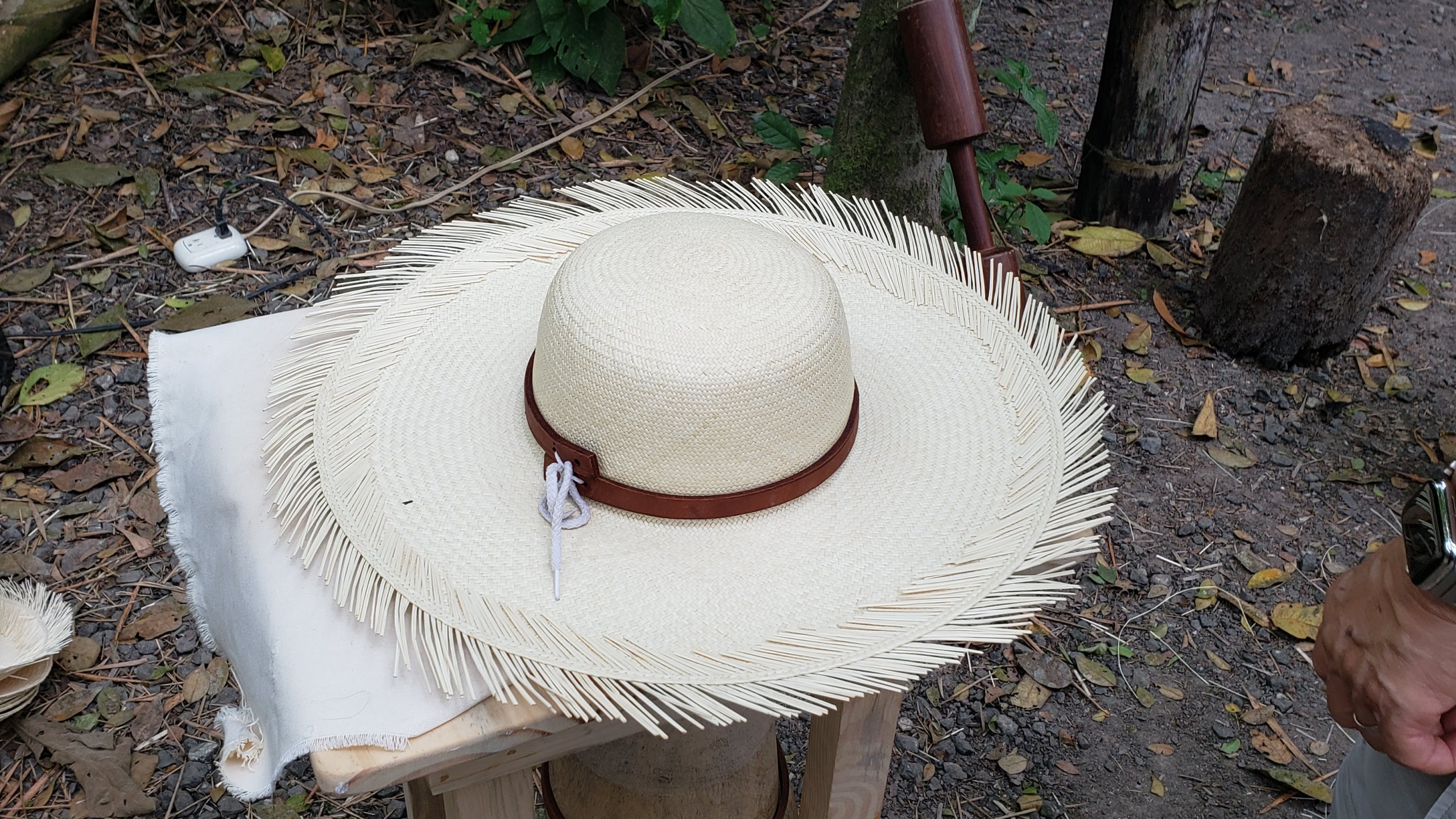 The ship arrived in Manta, Ecuador at 5:30 AM, and we were up early for our shore excursion starting at 7:45. The weather was overcast and the forecast was a little iffy but we hoped we could avoid the rain. The tour today is “Trails and Crafts of the Pacoche Wildlife Refuge” located in a subtropical forest.

David was the name of our local tour director today and he lectured almost non-stop about Equador, and more specifically Manta.

Here are some of the facts we learned about Manta:

And, here is what we learned about Ecuador:

So, all of this in a one-hour ride to our destination. Our very smart guide told us that in order to be a guide in Ecuador, one must complete 5 years at university.

We arrived at the park and were led to an open area where we learned about the Ivory Nut (also known as a tagua nut). David also referred to it as a vegetable nut. The Ivory Nut comes from a palm tree of the same name. A mature tree can produce many giant pods filled with about 100 or so nuts, or seeds, each year. The pods fall naturally from the trees and are harvested. At one time in Ecuador’s history, buttons were made from these nuts and were a primary export. Buttons are still made from the nuts as well as small carvings and beads.

After a demonstration on how they use the nuts for carvings we enjoyed a local snack. It was a ball made from mashed plantains, cheese and seasonings, called a bolon. They also served us some juice of which we never learned the name.

After our snack and a bathroom break we were shown how the people of Manta make the Toquilla Straw hat which is better known as the famous Panama hat. Did you know that the Panama hat is made entirely in Ecuador? The hats became known as “Panama hats” due to their massive export from Ecuador to Panama during the 19th century, promoted by Manuel Alfaro y Gonzalez and his wife during the construction of the Panama Canal.

The hat’s construction is quite a process. First they harvest the palm leaves, boiling, stripping and then drying the resulting strands. Next they weave the hats, shaping them as they go along. Then the hats are treated and dried for four days before they are sold.

Next we went on a hike and learned that there are more than 4,000 species of orchids, and 135 species of hummingbirds. Along the trail we came across a troop of Howler monkeys up in the trees, several of them with young. We got lots of pictures. Did you know that Howlers can live up to 15-20 years?

The last demonstration we enjoyed was how they used to extract sugar juice from sugar cane. We watched as a small mule named Maria, she was tethered to a pole, walked in a circle around the masher. This made the cane juicer draw a cane through a wringer and produce a lot of fresh sugar juice, which we also got to sample. Then they showed us how they would cook the juice down to make raw sugar, which we also got to sample – it tasted a bit like maple candy. Then they told us about the process to make alcohol from sugar cane juice. We didn’t get to try that.

Hopped up on sugar, we boarded the bus and returned to our ship in time for lunch and trivia, after which Alan passed out for a noisy nap.

At dinner we had the crab and artichoke dip with toast points, Alan had sirloin and prawns, and apple walnut spring rolls & cherry sauce, and I had pork belly with warm apple sauce, and burnt rhubarb Napoleon. Dang! they feed us so well here!

From dinner we went to the top deck and enjoyed a movie (“The Upside”) with a warm breeze under the stars.

After the movie we watched ship’s crew and passengers play The Pyramid Game.

A day at sea. We slept in this morning, getting up at 7:45. Since this is a simple day I thought I’d talk about cruising from my perspective.

We have cruised as short as 4 days and as long as, well, this trip, which will be 58 days. We have cruised with Carnival, Norwegian, and now with Princess. Below is my thoughts and opinions on each cruise line.

Princess (this cruise at least)

All the ships we have cruised on have had amenities such as a gym with machines and exercise classes, a spa, onboard shops, live music playing throughout the ship common areas at most hours (especially in the evenings), casino, bars, library, pools, hot tubs, concierge/front desk, tour desk, Internet cafe, and Internet access at an additional cost. They also all have drink packages which include sodas and/or libations. Water, coffee, tea, and juices are all free. The food/meals are included unless you eat at one of the specialty restaurants.

So there you have it, my take on cruising.

Up at 6:30 and down to the gym for both of us for an hour on the treadmill – hitting it hard. Buffet breakfast afterwards. On the way back to our room we stopped on the open deck (7) and watched dolphins. We even saw an albatross.

Later we went to play trivia and did pretty well with a score of 16 – the winners got 18.

We then got another workout with a digital scavenger hunt. This is where you get a list from the crew member running the hunt, and then you have to run all over the ship and take pictures of whatever is on the list. For instance, getting a massage in the spa, someone shooting hoops, a photo of a photo, doing the letters for YMCA, a crew member with spectacles on. You get the idea? We had a list of 20 and only 30 minutes to get them all. We managed to get 18 and came in third, out of three entrants. Running up and down stairs, back and forth on the ship… this replaced Zumba for me!

We worked on ID-ing the hummingbird pictures we took in Costa Rica using the Merlin app. It’s a good program but we got a couple of false answers – to be fair, the photos we used for those were a bit blurry.

Later we went to compete in Disney trivia and got 9 right, the winners had 16. Very hard and obscure questions – almost all of it was for the newer animated stuff.

While I worked on pictures Alan went to play Progressive Trivia. The category was animals. He got 18 right, the winners 19.

In the evening we played trivia again and got 13 right, winners had 17.

Dinner: Alan had chicken Satay, and pork loin, I had a martini glass of diced fruit and some chicken. We both enjoyed a small apple strudel a la mode. I also had a shot glass of Irish Cream.