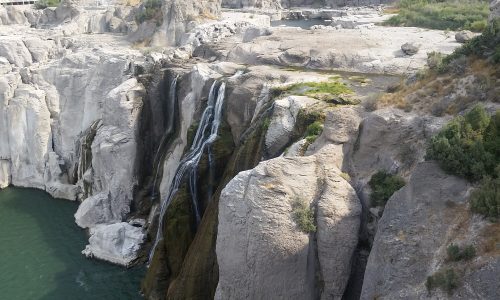 Posted on September 16, 2017September 28, 2017by KarenKratzin Landscapes, Something DifferentTags Friends

From the Palouse we drove to Boise, Idaho. One of my oldest and dearest friends lives there and I looked forward to catching up with her.

In the meantime, we stopped at an REI and picked up a new cooking pan, a more powerful lantern (700 lumens – oh, my!) and some tongs that wouldn’t be likely to pinch me when cooking with them.

Having called my friend, Robin, the day before, I drove to her house to pick her up and meet her ex-husband with whom she had “gotten back together”. He seemed like a nice guy. We got in the truck (Alan insisted that we catch up without him – he would join us later for dinner), and drove to downtown Boise for lunch at a place Robin liked. We stayed there for hours just talking. It came easy to us and we were able to bring each other up to speed on our respective lives. Later we drove around looking for a souvenir pin for Alan, but came up empty. Soon after I dropped her at home and went to the hotel to pick up Alan so the three of us could all meet for dinner.

Dinner was at a Mexican restaurant and we all had a nice time. It was hard saying good-bye in the parking lot, but we promised to keep in touch – better than before.

I called Robin before we left the hotel to ask if we could stop by and get a photo together. I’ve been doing this with all the friends I have been catching up with this year, and I’d forgotten to do it the night before. Picture taken, Alan and I headed to Yellowstone National Park. Psyched, we couldn’t wait to get there – it was one of the destinations we’d been looking forward to all during this trip.

Along the way we detoured to Shoshone Falls in Twin Falls, Idaho. The canyon at Shoshoe Falls was well known as the point where the famous Evel Knievel tried to jump the gorge, but failed. Unfortunately the falls were not at their peak and were, well, less than desirable for photos. So, on we went.

Because of the weather predictions; snow of 1-3 inches, we canceled our KOA and stayed at a hotel nearby. It did snow overnight, about 2-3 inches.